Lenovo, the world’s largest maker of traditional Windows notebooks and desktops, isn’t settling for anything less than domination in Windows and Android tablets. At this week’s Mobile World Congress event the company unveiled the Lenovo Tab 2 A8 and the Ideapad Miix 300 for tablet buyers on a budget this summer.

Despite them being of the same elk, the Tab 2 A8 and Ideapad Miix 300 are separate devices meant for two very different kind of users. First, there’s the casual shopper in the market for a well-equipped, but reasonably priced android tablet. It’s the Tab 2 A8 that fills this niche nicely.

The Lenovo Tab A 2 A8 is an 8-inch Android tablet with all of the necessary extras. A Mediatek quad-core processor and 1GB of RAM powers the Tab 2 A8 for at least 8 hours, according to Lenovo. The company is hoping that 3D sound technology from Dolby and an 8-inch high-definition display will provide a great video and music experience for users. 16GB of built-in storage is what users will keep that music and video on, but they’ll have the option to add more storage with a MicroSD card slot. There’s a rear-facing 5 megapixel camera as well as a 2 megapixel front-facing camera for video chatting. Bluetooth 4.0 and Wi-Fi are built in.

The Tab 2 A8 is primarily an Android tablet, but Lenovo is also pushing the idea of a tablet that can replace a smartphone. To that end, the Tab 2 A8 comes with dual-SIM card slots so that users can make phone calls and browse the internet away from a stable Wi-Fi connection. Lenovo hopes to begin selling the Tab 2 A8 this June for as little as $129.99. It’ll offer the device in Pearl White, Ebony, Midnight Blue and Neon Pink. The Lenovo Tab 2 A8 is running Android 5.0, Google’s latest and greatest operating system. 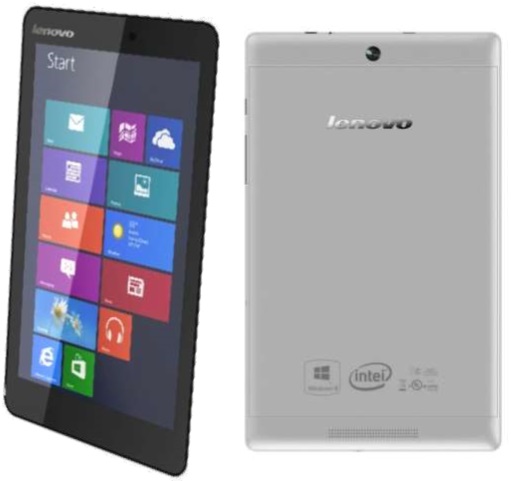 The Ideapad Miix 300 is simply meant to be a decent Windows 8.1 tablet at a reasonable price. Starting at $149, every Miix 300 will come with an 8-inch IPS display. A quad-core Intel Atom processor and 2GB powers the entire thing, meaning buyers can install apps from the Windows Store or Desktop apps like iTunes. Users will be able to store all of these apps and programs on the device’s built-in 64GB cache.

A microSD card slot and microUSB 2.0 port are the only two physical connection options the Ideapad Miix 300 offers. A front-facing 2 megapixel camera and rear-facing 5 megapixel camera are built into the package as well. Bluetooth 4.0 and Wi-Fi are included here too.

The Ideapad Miix 300 weighs just 0.8 pounds, making it ridiculously portable. That size, plus a free one-year subscription to Microsoft’s Office 365 service make it the ultimate mobile productivity tool as well as just a cheap Windows tablet in general. Office 365 is the service that lets users download full copies of Microsoft Word, PowerPoint, OneNote and Excel for $6.99 a month or $69.99 a year. Unfortunately for Windows lovers, the Lenovo Ideaad Miix 300 won’t come in nearly as many colors as the Tab A 2 A8. Users can expect just Platinum Silver when the Miix 300 arrives on store shelves this July.

Both the Lenovo Miix 300 and Lenovo Tab 2 A8 offer something unique for tablet shoppers looking for something besides Apple’s iPad during the Back-to-School shopping season.