Lenovo’s ThinkPad Tablet is a good companion device for the more business-minded amongst us. Still, as with all tablets, it’s productivity quotient isn’t so high when it comes to on-screen typing. The FlexT9 keyboard is fine for basic text input, but when you write something longer than a few lines or want to type faster than tracing words will allow, you need an external keyboard.

Lenovo’s Keyboard Folio Case adds a physical keyboard and an optical mouse to the ThinkPad experience. It also makes the tablet look even more like a ThinkPad notebook thanks to the design and layout. But is this accessory worth the extra $99.99?

Read on to find out.

Hands on With the ThinkPad Tablet Portfolio

The keyboard itself is 9.5 inches wide and 4 inches deep, which is slightly larger than most netbook keyboards. And like some netbooks, to keep things small there are some slightly undersized keys like Enter and Shift. Overall, key size is good and I didn’t feel cramped or crowded when typing.

Keys have the same basic shape as ThinkPad notebook keys (new style, not old school), so you get a nice dip in the center that helps with accuracy. I’m a messy typist, but I was able to get up to my normal rate right away with only a slight dip in accuracy.

Since the keyboard is shallow and in a tablet case, you’re not going to get the same firm tactile feedback and travel as you would on a notebook. There’s also a small amount of flex if you press hard enough. For what it is, the Folio keyboard rates high for comfort and usability.

In addition to the normal QWERTY layout and full number row, the Folio also has special Android OS keys. Along the top where the F1 – F12 keys would normally sit, Lenovo provides one-press access to Home, Settings, Brightness, Volume, Zoom and multimedia controls. On the lower left side the Ctrl key brings up the Menu and a Search key sits where the Fn or Windows key normally would. On the right, a Sym key will bring up the Keyboard input method. 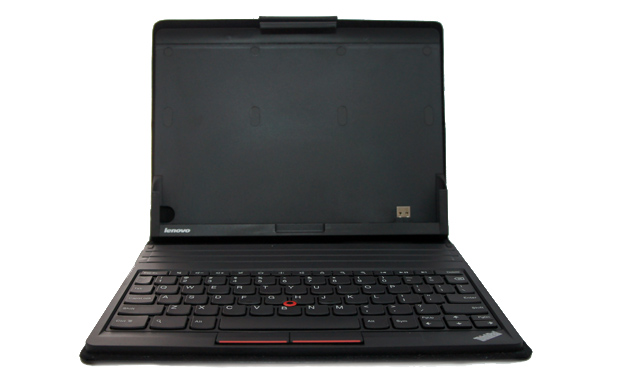 When I first started with the Folio, the FlexT9 keyboard was set as the default. But I found that the physical keyboard’s performance wasn’t great with this on. The T9 was trying to correct spelling as I typed, slowing down the process. Choosing the default Android keyboard solved the problem.

Because the keyboard is so thin, there wasn’t room for a normal TrackPoint’s hardware. Instead, Lenovo included an optical TrackPoint. Sitting in the middle of the keyboard just where you’d expect to find it, users must glide their finger over the surface instead of physically pushing to move the arrow around the display. 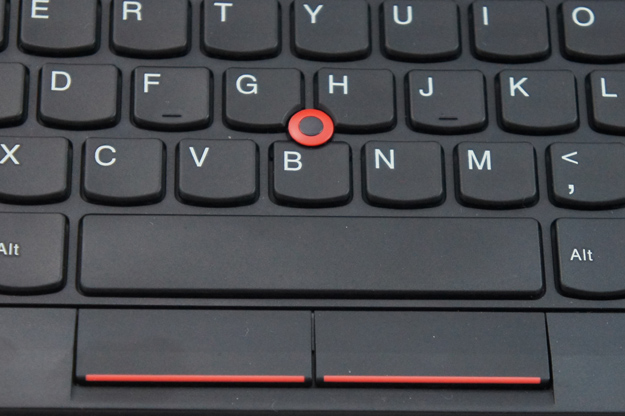 I didn’t find myself using this much, defaulting to tapping the screen when I needed to. The optical surface is small, so you have to swipe several times to get the arrow from one side of the screen to the other. But since it’s connected to a touchscreen device, this isn’t a dealbreaker.

Typists who like not having to move their fingers from the home row to use the mouse will appreciate this function. It’s also useful for placing the cursor precisely when writing. Otherwise, it doesn’t offer much advantage over just tapping the screen.

Just under the space bar sit two mouse buttons that are easy to reach with a thumb when typing. Just as with the keys, thy aren’t very clicky, but work well. The left one acts as you’d expect, emulating a tap. The right one behaves differently in each app, but often acts as a Menu button.

There are some clever elements to the Folio’s design and also much room for improvement in some areas. The case is 1.25 inches thick with the ThinkPad inside and weighs 1.4 pounds on its own. Together with the 1.6 pound tablet, it’s heavier than the average netbook (2.8 pounds) and just 0.2 pounds lighter than most 11.6-inch ultraportables.

The cradle bit that holds the tablet in place leaves the sides open for port access and has a USB dongle that sticks up, physically connecting the keyboard and mouse to the system. This is good as you don’t need to use up battery with a Bluetooth connection and won’t find the letters lagging behind if you’re a fast typist. 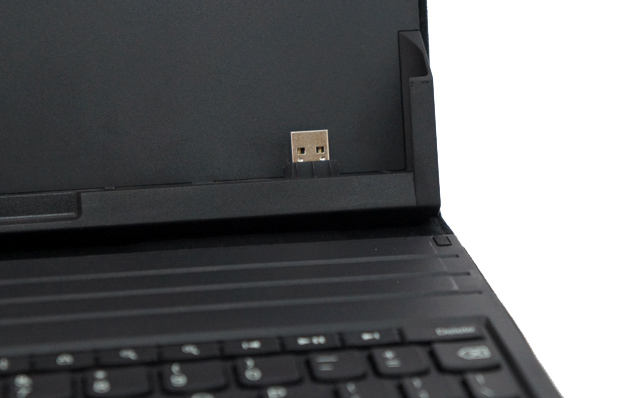 Sliding the tablet in and pulling it out is more awkward than it needs to be and it takes more force than it should.

Once in, the Folio can hold the tablet at three different angles — they’re not very far off from each other, but are useful in a room with bright overhead lights. It also takes up less space on an airline tray table than a netbook or an ultraportable. I like that the case not only has grooves to keep the tablet stable, but this area is magnetized, so the top part stays firmly in place even if you jostle the Folio a little. 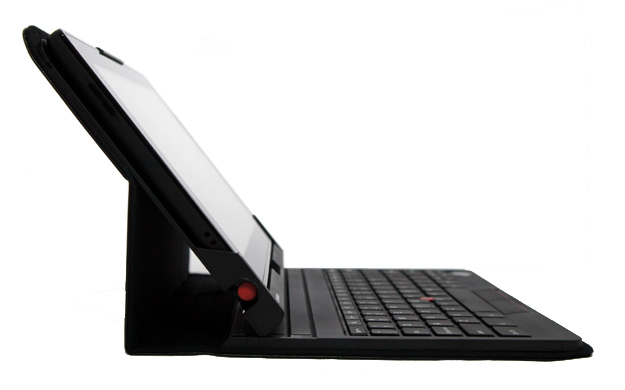 On flat, stable surfaces I had no trouble setting up and getting right down to typing. The Folio isn’t great for typing in your lap, though, especially if you’re on a train or a moving vehicle. The bottom piece isn’t quite wide enough and the center of gravity just off from a traditional notebook to make the Folio unstable in these situations. 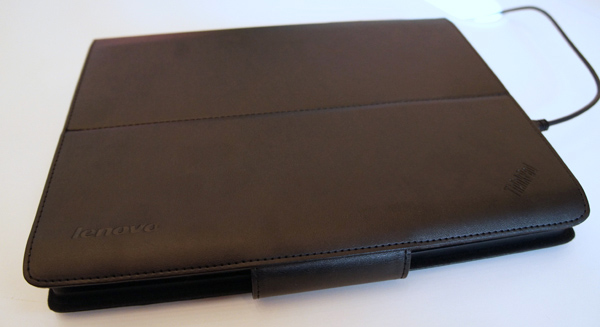 The case folds up easily and a magnetic flap keeps it together when not in use. The leather covering is very nondescript, looking like nothing more than a Filofax or similar from the outside.

My biggest issue with the Keyboard Folio is that you can’t use the tablet as a tablet when it’s in the case. There’s no way to easily fold it around or just fold the tablet part over the keys. This wouldn’t be a big deal if it was easier to get the ThinkPad in and out of the thing. It also wouldn’t be as big a deal if it wasn’t also a case.

In order to conveniently pull the tablet out when I just want to use it as a slate, I ended up carrying it in a separate slipcase while also carrying the Folio for when I needed the keyboard, which defeats the purpose. 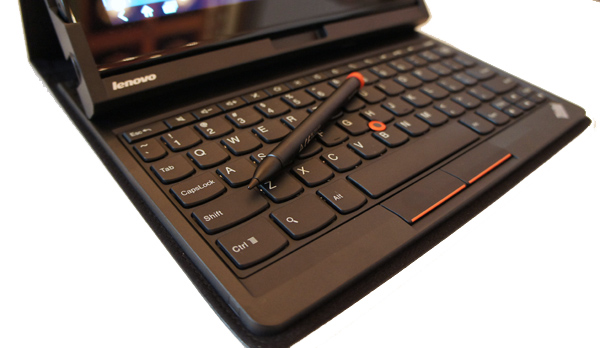 If the design issues I mentioned put you off the Keyboard Folio, you do have some alternatives. The ThinkPad’s USB port will accept any USB keyboard, after all. And there are Bluetooth keyboards like the one Logitech makes (read my full review). Both of those options have drawbacks — portability, usability — and neither comes with the optical mouse.

If you plan to use the ThinkPad Tablet for serious productivity, then the Keyboard Folio is a good addition to your arsenal. However, if you need a notebook with you and use the tablet as an adjunct, you can safely skip this accessory. 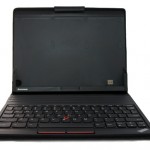 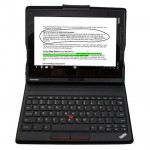 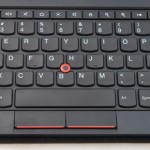 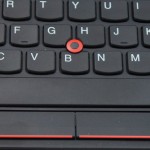 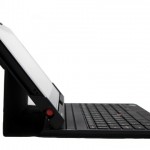 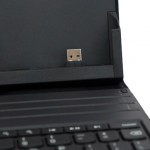 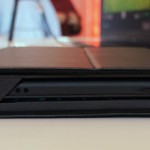 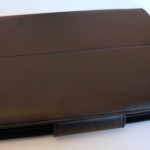 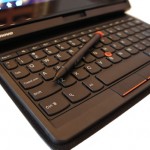