While others are going small in the new tablet era, Lenovo is going big with their refreshed, redesigned ThinkPad X220 line. Not in size, but in power. With Intel Core i7 processors and extended batteries offering up to 16 hours of runtime, the ThinkPad X220 Tablet convertible Tablet PC is a powerhouse, yet still starts at under four pounds. 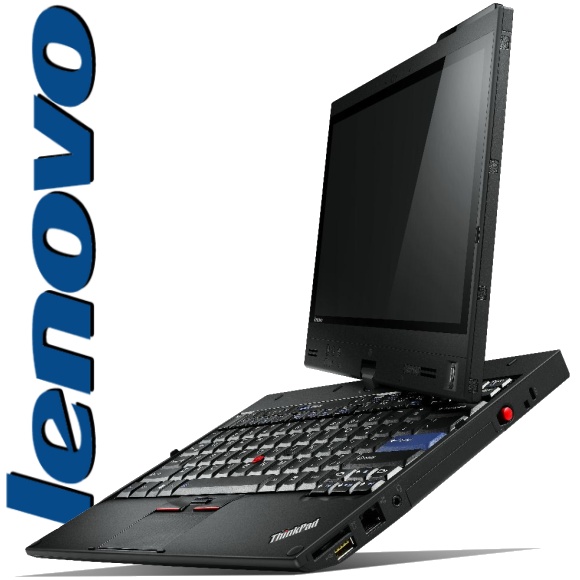 Our own Josh Smith had the opportunity to review the non-tablet version of the X220. There are some spec differences between the notebook and tablet versions of the X220 (the data sheet and press release no longer use the “t” suffix for the tablet version). However, they are similar enough that Josh’s review of the performance should apply to both (and vary with configuration).

The tablet model features pen + multi-touch input with an option for a direct-bonded Gorilla Glass display for ultimate scratch-resistance. Touchscreen input is listed as “2 finger touch/5 finger gesture”. I’m guessing that means a five-finger swipe can trigger a command, but not streak five brush strokes in Paint. The 12.5″ 1366×768 display offers 300 NIT brightness via LED backlight. A new hinge design allows for better antenna and speaker placement, as well as more space for a 45% larger, button-less trackpad better suited for multi-touch gestures. In addition, it is semi-rugged, passing eight MIL-SPEC tests for durability and reliability.

The inside of the new PCs reveal a cleaner, sharper design over previous models. Both the ThinkPad X220 laptop and X220 Tablet feature a 12.5-inch HD screen and self-closing hinges that shut the PCs. This space-saving hinge design brings several key benefits: better antenna and speaker placement for stronger throughput, a 45 percent larger touchpad and a cleaner visual design. The larger, button less trackpad gives extra room for fingers to scroll, highlight and do multitouch gestures.

16 hours of battery life is attained through the use of the six-cell battery and the X-Series battery pack. Nine hours without the X-Series pack and less with the standard 4-cell battery. Weight starts at 3.88 lbs with the 4-cell and goes up from there. Pricing is not final, but the laptop model will start at $899.

RESEARCH TRIANGLE PARK, NC – March 8, 2011: Lenovo announced today the next generation of the best-selling ultraportable laptop of 20101 – the ThinkPad X220 laptop – and the X220 convertible Tablet PC. These PCs give mobile business professionals the full performance and usability found in larger laptops, but in a super ultraportable design. The PCs run up to 75 percent faster than ultraportable competitors that use low-powered CPUs2, feature smart PC technologies for incredibly long battery life up to 24 hours3 on the ThinkPad X220 and sport a clean, revamped design with hinge-based latching and a giant touchpad in a thinner laptop design. Additionally, they feature improved durability with wider drain-holes in the spill resistant keyboard and a 50% improvement in drop test performance4.

24 hour Battery Life for Around the Clock Computing

The ThinkPad X220 offers up to 15 hours battery life with a standard 9-cell battery. Battery life jumps up to 24-hours by adding the new ThinkPad external battery. The convertible tablet starts under four pounds with its standard 4-cell battery.  When combined with a 6-cell battery and the external battery pack, the tablet can run for 16 hours continuously on one charge. Users charge the PCs on the external ThinkPad Battery when connected to the PC or separately. A battery charge indicator shows when the battery reaches a full charge.

These speed-optimized PCs fit the same full-powered CPUs as bigger 14 and 15-inch laptops for full performance5, while similar weight competitors offer only low powered CPUs. Lenovo Enhanced Experience 2.0 primes the PCs for rapid boot, shut down and resume from sleep by tuning the BIOS and other hardware settings. With Intel™ HD integrated graphics the PCs perform twice as quickly in streaming video, editing photos and loading web pages. Additionally, USB 3.0 technology on select models transfers data lightning fast, up to 10 times that of USB 2.0.

The PCs also keep corridor warriors connected longer with Lenovo’s new Instant Resume function. This function maintains connections during sleep mode for up to 99 minutes, eliminating the need to login and reconnect between meetings. And tablet users don’t have to worry about losing their pen with the new “never-lost-pen” technology. It notifies a person when he or she moves the tablet without the pen in the pen-holder.

The inside of the new PCs reveal a cleaner, sharper design over previous models. Both the ThinkPad X220 laptop and X220 Tablet feature a 12.5-inch HD screen and self-closing hinges that shut the PCs. This space-saving hinge design brings several key benefits: better antenna and speaker placement for stronger thoroughput, a 45 percent larger touchpad and a cleaner visual design. The larger, buttonless touchpad gives extra room for fingers to scroll, highlight and do multitouch gestures.

For students, mobile sales forces and other mobile professionals working outside, the multitouch tablet now adds a new rough and tough feature to its super bright, 300-nit screen with scratch-resistant Gorilla Glass. Already military specifications tested to meet extreme conditions, Gorilla Glass strengthens the screen so it can withstand scratches, scrapes and abuse from the field.

The PCs are also business-ready: They’re easy for IT administrators to use and manage thanks to their second generation Intel™ Core® and Core® vPro processors. Common ThinkPad docking stations and batteries also allow companies to swap hardware among employees to maximize their resources and minimize cost.