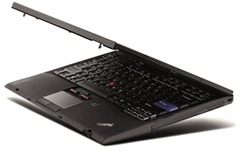 Weird timing on this one. Late Friday is not your typical time to announce new products, but hey, word popped out on Friday night that Lenovo is extending its ““carry it in a manilla envelope thinÃ¢â‚¬Â ThinkPad X300 line with the X301. The ThinkPad X301 will feature the Intel Core 2 Duo ULV U9300 and U9400 chipsets and come with options for a 64 or 128GB SSD. The X310 will also have a new support for DisplayPort that allows viewers to watch HD on multiple displays. It will feature all the mobile goodness we are becoming accustomed to including Ultra-Wideband and integrated mobile broadband. It will also have GPS capability. The official announcement is scheduled for August 26. The price is listed as $2599.

Check out Rob’s InkShow of the Lenovo ThinkPad X300.

New support for DisplayPort makes viewing high definition content easy and
ideal for models with the ultra-thin DVD burner. With support for both
DisplayPort and VGA, users can even watch high definition content on
multiple displays. Designed for maximum options for wireless connectivity,
the ThinkPad X301 notebook offers models with high-speed mobile broadband3
and WiFi3 to connect wirelessly to the Internet, and also with Bluetooth and
Ultra-Wideband technology to connect wirelessly to other devices. Lenovo
offers improved uplink performance by up to 250 percent for models with AT&T
mobile broadband over previous ThinkPad notebooks with AT&T mobile
broadband4. Models supporting WiMAX will be available later this year.
Additionally, GPS on notebook models with high speed mobile broadband5 allow
travelers to more easily navigate to the office or airport.

Pricing and Availability6
Pricing for models of the ThinkPad X301 notebook starts at approximately
$2,599. The notebook will be available on August 26 through Lenovo Business
Partners and www.lenovo.com.