The world’s largest PC maker, Lenovo, isn’t depending on the line-up it already has available to attract PC buyers in the new year. This morning at the Consumer Electronics Show in Las Vegas the company revealed a refreshed ThinkPad Yoga line that may finally deliver that flawless Windows 2-in-1 experience users have been after along with bigger screens.

To be clear, Lenovo didn’t reveal a single ThinkPad Yoga. Instead, it announced three new ThinkPad Yogas based around screen size and performance. They’ll all hit the same notes, offering features that users rarely get with other Windows 2-in-1s like digital pen support, Bluetooth 4.0, HDMI in, keyboard backlighting and a 4-in-1 media card reader. 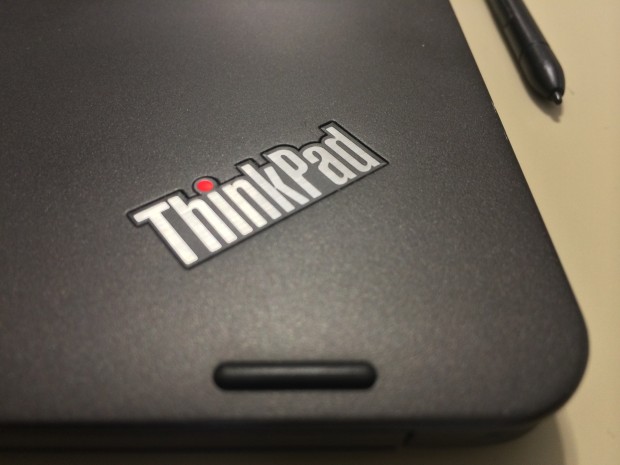 The ThinkPad Yoga’s glowing logos are one of the only real design flourishes it has.

The first is the Lenovo ThinkPad Yoga 12, which will compete directly against Ultrabooks like the MacBook Air and convertibles like Microsoft’s own Surface Pro 3. The ThinkPad Yoga 12 will feature a 12.5-inch high definition display and touch, or an updated 1080p IPS display with glare protection and optional touch. Processor options will include a 5th generation Intel Core i5 or i7 Processor. Being an Ultrabook, it’ll only have Intel HD graphics. 4GB and 8GB options for DDR3 RAM will be available for users.

ThinkPad Yoga 12 buyers can expect a notebook that’s as thin and light as anything we’ve seen from the company yet. It’ll weigh 3.4 pounds, and measure about 0.7-inches from top to bottom.

The ThinkPad Yoga 14 is built around a larger 14-inch IPS display with AntiGlare class and mandatory touch technology. Instead of being beholden to Intel HD Graphics, users will have the option to add in a discrete NVidia graphics card. Swapping out basic graphics for a dedicated graphics card gets users less battery power, but better performance in games and media making with programs like Adobe Photoshop. Processors for the ThinkPad Yoga 14 will also come in just two versions, the 5th Generation Intel Core i5 and Intel Core i7. Of course, with a bigger screen comes more the need for a bigger battery and more heft. The ThinkPad Yoga 14 is still 0.8-inches thin but weighs 4.18 pounds.

Finally, there’s the ThinkPad Yoga 15. It’s pretty much a Windows 2-in-1 for users who want a desktop experience on the go. It has a 15.6-inch 1080p display with touch. The same 5th generation Intel Core processors, NVidia graphics options, and memory are back here too. Buyers of the ThinkPad Yoga do get some crucial extras. The ThinkPad Yoga 15 has JBL’s excellent dual speakers. They’re better for getting a full multimedia experience. Additionally, there are 8GB and 16GB memory options. The keyboard in this model includes a numerical pad. The big drawback to these extra features is weight and battery life. The ThinkPad Yoga 15 weighs a whopping 5.07 pounds and will include the same size, 47Whr battery as the other members of the new ThinkPad Yoga family. With the extra screen real-estate there’s no way users are looking at the same amount of screen time as the other notebooks in the ThinkPad Yoga family.

ThinkPad Yoga 15 buyers will be among the first members of the Windows ecosystem to have the option of taking advantage of Intel’s RealSense technology. RealSense is a 3D camera and infrared sensor that tracks gestures like Microsoft’s Kinect sensors for the Xbox One and Xbox 360. Intel revealed RealSense at last year’s Consumer Electronics Show.

Lenovo is counting on the ThinkPad Yoga line being able to attract all kinds of users. To do that it needs to offer something that other machines don’t. One of the truly unique features the ThinkPad Yoga offers today is its retractable keys. When you put the new ThinkPad Yoga into the Tablet Mode, Stand Mode or Presentation Mode from past models, the keys disappear into its body to prevent breaking. Each also has a pen and digitizer, making those Tablet Modes an easy way to take notes.