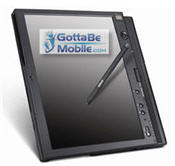 Well, I couldn’t stand it, I had to move forward and attempt a Vista install on the Lenovo X60 Tablet PC.  This is NOT a supported installation process, and there are not yet any drivers available from Lenovo, so I knew I was moving forward totally on my own with this attempt.  But, ya know, it had to be done anyway!

This install was done with Windows Vista Ultimate RTM build.

Well, the process improved both my love of this Tablet PC, and my love for Vista!  I did not attempt an in place upgrade, since I had messed around way too much on the X60 as it was and did not want to re-image to base install and then upgrade.  I simply removed the “Pre load” partition, and let Vista do it’s thing.  It was surprisingly fast (about 30 minutes I guess), and went very smoothly. I did not end up with a totally workable system at the end, but I was only missing a couple of drivers.  More on that in a minute, though.

One thing that I did before wiping the pre-load XP partition, was to grab an image of the partition with Acronis True Image Home

version 10.0.  Smart move on my part!  True Image 10 is supported in Windows Vista, and is an essential tool in my arsenal for many reasons.  If you have never tried this product, go try the trial!  As I mentioned, there is no driver support officially from Lenovo, and there is not even a page yet to download XP drivers for the X60 Tablet since it is a brand new model (although very possibly some X60 notebook drivers may work also).  So when I finished the Vista install, I had a couple of un-installed devices in Device Manager.  One was clearly the Fingerprint reader, and the other was the Touch Screen on my X60, but I did not have any way to tell for sure from the description.  Well, in order to get those drivers, I simply “mounted” the True Image X60 XP image as a driver letter, and told Vista to search it for the drivers for each item, and “whalla”, they installed!  Where it did not help me was on drivers that are not plug and play (like the buttons).  What I am missing at this point is button support, and some other X60 features like the “Auto-rotate” function.  No show stoppers, but I miss them already. I do have screen rotation in Mobility Center, my pen works great, I have Touch Screen functionality (including the new Vista touch enhancements — very cool btw).  I do not have fingerprint utility either. As I said, the install is not complete, but it was surprisingly easy for me to get a very nicely working machine going with a complete lack of drivers.  What this tells me is that when Lenovo gets the drivers up on their site, it should work well.

So how about performance?  Ohhh, yeah…..!  It is working VERY well.  This is by far my best experience with Vista.  I have shared the concern by some on the decision not to release a Core 2 Duo version of this machine, but after this install, I have little if any concerns about how happy I will be with this processor under Windows Vista.  The performance index is a 3.0, which is pretty nice!  You see here the actual screen grab, which explains why it is no higher.  Basically, it looks to me that the graphics adapter and memory that is the shortcoming, but it could be a higher number on the SXGA+ screen model.  Not sure exactly how that is being evaluated.  Warner will install Vista soon, and we’ll see what he gets there.  Regardless, I am running Aero Glass, everything is most snappy, and I am a happy camper.

I am so happy with this install, that I am using this machine almost full time for my needs now.  I look forward to even more great use as I find drivers or ways to install the functionality I am missing.  I really look forward to the official release of Vista drivers and support from Lenovo though!  I’ll keep you updated with progress…

Man I love this machine…..