Lenovo is taking the battle to Apple’s MacBook Pro and other high-end machines with a mix of laptop design and the build quality and staid design the company is known for. Earlier today, Lenovo revealed two refreshed laptops for mobile power users: the Lenovo Y70 Touch and the Lenovo Edge 15. 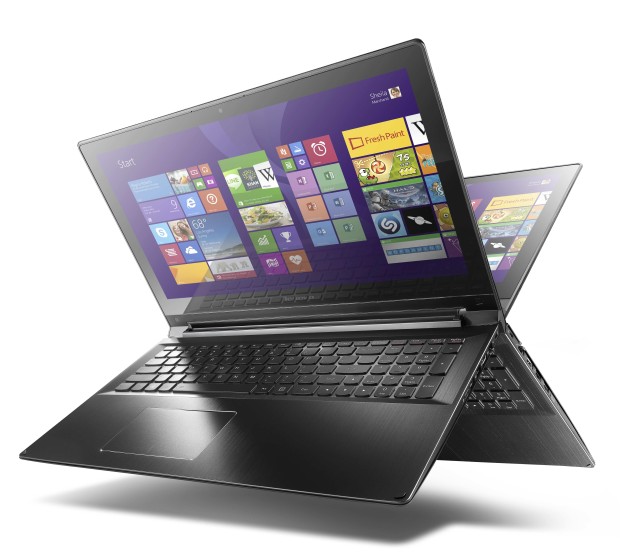 The $899 Lenovo Edge 15 will feature two different usage modes. That is, instead of being able to position the screen and make it collapse in on itself like the ThinkPad Yoga, Edge 15 buyers will be able to move the device’s screen in a 300 degree angle to support a laptop mode and a sort of stand mode. Stand mode gives users a better angle to interact with the device’s touch screen.

As its name suggests, the Lenovo Edge 15 will include a 15.6-inch display for users to interact with. Inside, the device will have all the necessary features of a high-end laptop. That display is capable of showing videos in high-definition and a NVIDIA GeForce GT840M graphics card or Intel integrated graphics will let users get a pretty decent gaming experience from it. A 4th generation Intel Core i5 processor with 8GB of RAM will come standard. Users will have the option to include a 1 terabyte hard drive in their customized Lenovo Edge 15 or opt for a hybrid drive that includes flash storage and a typical hard drive. Standard hard drives are slower than hybrid drives but offer a lot more room to keep movies, pictures, videos and game files.

Users will be able to upgrade the Lenovo Edge 15 to a more powerful Intel Core i7 processor too. A front-facing web camera will be included in all models. Users can also expect the Lenovo Edge 15’s keys to glow in the dark – that’s something that absolutely every high-end laptop needs to be useful in places without a lot of light, like planes.  It’s mobile too, with battery life in between charges reaching eight hours, according to Lenovo.

Lenovo expects to Best Buy to begin carrying the Lenovo Edge 15 at its stores this October. Users will be able to customize their own machine’s internals on the company’s website too.

For those who want a bit more screen real estate, there’s the Lenovo Y70 Touch. The laptop, which will début in the United States this October starting at $1,299, will include a 17-inch touchscreen display – making it the company’s largest touchscreen laptop. A 4th generation Intel Core i7 processor and GTX graphics card provided by NVDIA will allow the device to play just about any game buyers can throw at it. To enhance their gaming experience Lenovo is throwing in an external optical drive so that it’s easier to play PC games purchased in stores. The base model will include a 1 terabyte hard drive, but users will be able to choose a 256GB Solid State Drive for faster booting and low loading times. They’ll also be able to add as much as 16GB RAM.

Unfortunately, users won’t be able to reposition the Lenovo Y70 Touch’s display to make it easier to interact with using touch. It’ll only get 5 hours of battery life too, making it a little less mobile than some gamer’s might prefer. That backlit keyboard that makes the Lenovo Edge 15 great for working anywhere will be included in the Lenovo Y70 Touch too.