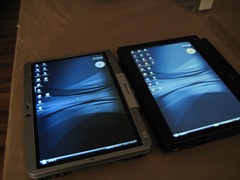 I am really, really enjoying using both the HP 2730p and the Lenovo ThinkPad X200 Tablet PCs. I’ve said this before and will say it again, these are both excellent additions to the ranks of Tablet PCs. I’ve posted benchmarks, but as I said in that post, I’m not a fan of using benchmarks to gauge things. I much prefer to see how a Tablet PC performs in my real world scenario. The emphasis there is on ““my real world.Ã¢â‚¬Â

Most of the work I do demands very little processing power, but when I hit those tasks, the need for power is there. The heaviest demands I place on a Tablet PC are in just a few areas. They include:

One other significant difference between the machines is that the HP 2730p has 3GB of memory installed. All others have 2GB.

These results are merely what I’m seeing based on my workflow. I don’t offer them as any conclusive result of how one machine will compare to another. In fact, given the variables that would be almost impossible. I will say this though, as I’ve said before, the new Intel processors are a real step up in performance.

Printing a Script to OneNote: This is a task I do quite a bit, as I love to take notes directly on a script I’m working with. The file I printed is a 284KB Microsoft Word document that runs 135 pages.