Maybe they were just waiting for Michael Phelps to be done with his historic Olympic run or maybe we’re just starting to hear about it. Whatever the case, Jenn at Pocketables is reporting that Lenovo’s U8 MID has finally made its Olympic debut. Remember there are no plans for the U8 to make it to this country, so don’t get your medal hopes up too much. 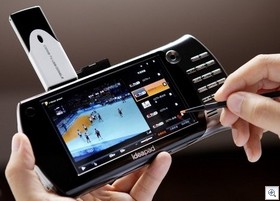