Today Lenovo officially unveiled the X1 Carbon, the world’s lightest 14″ notebook. Weighing in at three pounds and with a strong dose of creature comforts, the X1 Carbon is the kind of notebook companies that care about their employees should buy.

The X1 Carbon is similar to the 13.3″ ThinkPad X1 that Lenovo released last year, but with several  key improvements.

The most obvious is the new 14″ display, with 1600 x 900 pixel resolution. A 14″ display means users don’t have to sacrifice screen real estate when moving from a standard 14″ business notebook such as the ThinkPad T420. The X1 Carbon has the same footprint as its predecessor.

I got to go hands-on with the ThinkPad X1 Carbon and absolutely loved how it felt. The keyboard is 100% ThinkPad and it feels even lighter than it looks. Those considering a 12″ business notebook such as the ThinkPad X220 will want to at least take a look at the X1 Carbon before making a decision.

Battery life is improved on the new X1 Carbon compared to the original X1. One killer feature is that the X1 Carbon can be charged to 80% in just 30 minutes. 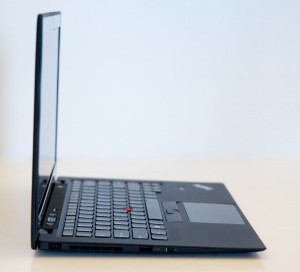 Another beautiful thing about the X1 Carbon is that it comes with built-in 3G. No long-term contract is required to hop online via 3G since Lenovo is partnering with carriers to offer pay-as-you-go wireless service. A company representative even hinted at hourly  access for a couple of bucks.

Lenovo didn’t assign an arbitrary name to this notebook, as is generally the case with smartphones these days. The X1 Carbon actually has a carbon fiber roll cage that protects its innards without adding much weight at all.

The X1 Carbon is the kind of notebook people can fall in love with. Sure, it’ll cost a little more than traditional business notebooks, but companies will surely see positive ROI’s as workers will be able to be more productive and take the X1 anywhere.

Visit Notebooks.com for more details and photos of the ThinkPad X1 Carbon.