A restaurant owner called out Philadelphia Eagles star LeSean McCoy for leaving a 20-cent tip on a $61 lunch tab by posting the receipt on Facebook. There’s been a strong backlash against the restaurant and McCoy on Facebook and Twitter, embarrassing both parties. This is exactly the kind of situation that Apple Pay could help avoid in the future.

Sean McCoy is a running back that’s in the midst of a $45 million contract. The servers at the Philadelphia burger shop PYT were excited to meet the sports hero when he came in for lunch yesterday and were a bit nervous serving him. After seeing that McCoy left a 20 cent tip on the bill for himself and his friends, the owner decide to post a photo of the receipt to Facebook. Restaurants generally regard credit card receipts as customer data and aren’t supposed to post them online. There can be a number of security and privacy issues with doing so. Often times credit card receipts display the last four digits of customers’ credit cards-,which are the same four digits banks and merchants use as security challenges, such as in online shopping carts, apps and when calling in for balances. There can also be privacy concerns such as alerting the public which restaurants people frequent. 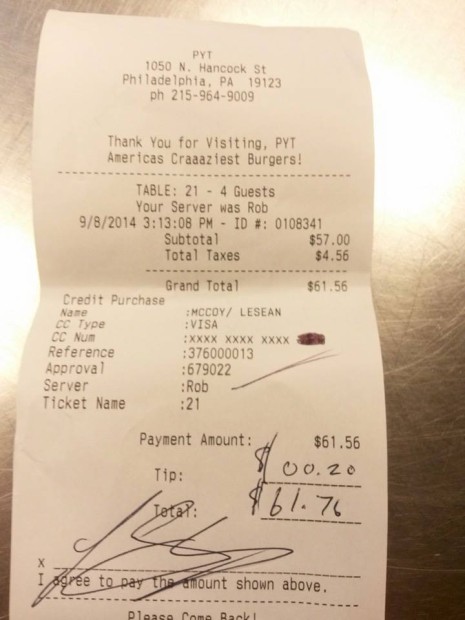 It may not bother the average Joe for people to know about his favorite lunch spot, but someone like LeSean McCoy could value a place to eat where he won’t be mobbed.  The reason the photo of this receipt has gone viral is because of LeSean McCoy’s celebrity status and the fact that he makes more per game than some waiters can make in a decade. Football fans and many others have called PYT’s owner out for releasing the receipt, but he refuses to apologize and defends his action. According to an update on PUT’s Facebook page, he said LeSean McCoy’s party was rude and insulted his staff, despite receiving excellent service.

Apple’s new iPhone 6, iPhone 6s and iPhone 5s will soon allow customers to pay for purchases at retailers and restaurants with Apple Pay. Instead of handing over their credit cards, customers will soon be able to tap their phones against NFC-enabled terminals. Their credit card numbers, names and other private data will not be transmitted to vendors. If LeSean McCoy had payed PYT with an iPhone 6, all the restaurant’s owner would’ve been able to post to Facebook would be a text account of what happened, which would most certainly not have garnered as much attention as the picture of the receipt with McCoy’s name on it.

Apple released the iPhone 6 and the iPhone 6 Plus today at a press event. The new models are larger than their predecessors, have improved cameras and a Near Field Communications chip that enables secure payments. The company also introduced Apple Watch, a wearable device that can also be used with Apple Pay to make payments.