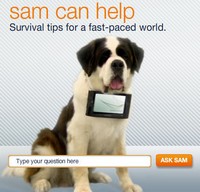 The holidays bring out the best and the wackiest of the marketing mavens as everyone tries to win you hearts, minds, and dollars. Very seldom in the past have we seen efforts aimed at Tablet PCs, and of course this is our first UMPC Christmas. Well, Samsung upped the ante a bit with a clever little promotion that they have running. If you want to know more about how the Samsung Q1 can help you survive in a fast-paced world, just head on over to the site, enter a question, and let Sam the St. Bernard give you an answer.

Not only that but you can enter to win a Samsung Q1 as well. They are giving two Q1s away each week until December 17. And make sure you catch some of  Sam’s clever videos as he helps wayward mobile warriors solve their issues.