Let's Clean Up The Act on Smudgy Screens

This week I’ve been lucky enough to test out several different Tablet PCs during rehearsals for our production of Driving Miss Daisy that starts performances at Wayside Theatre today. Tablet PCs, (and UMPCs for that matter), are all about note taking for me. During rehearsals I am constantly taking notes. I’ll be blogging more about my experiences with the various devices (Lenovo ThinkPad X61, Motion F5, Fujitsu P1620) and note taking software in this next week.

Last night at rehearsal though one of our staff was looking over my shoulder when I had the Motion F5 in my lap and noticed the screen smudges. They asked me if it was broken. 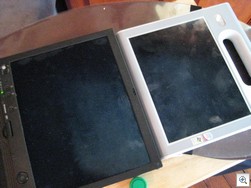 I’ve become accustomed (obviously too accustomed) to the smudges on the Lenovo ThinkPad when I’m in note taking mode and I guess I’ve learned to ignore them. Both the Motion and the Lenovo have a ViewAnywhere technology on their screens. Lenovo calls theirs SuperView and whatever the coating is that supposedly lets you view the screen in bright light conditions leads to the smudgy deposits that fill the screen. It is unsightly, and I’ve found the pen actually starting to drag as it passes through some of the gunk.

Again, I’ve gotten used to this, and thanks to the Shwamee Microfiber cleaning cloth I use, I’ve gotten into a routine of cleaning the screen each night or morning. But my colleague’s “is it broken?” comment drew a new picture for me last night.

Think about this OEMs. Someone sees someone using your product and decides to take a closer look. They see that smudged up screen. That can’t be a favorable impression. The explanations of why the smudges are so apparent also can’t do much to make that first impression go away when the explanation begins with “oh, that’s the technology that lets you view the screen in bright light conditions,” especially when those greasy deposits do nothing but reflect light.

This isn’t just a usability or a technology issue, it is also a marketing issue. OEM’s would be wise to look for a better way if they want potential customers to see a clear path to purchasing their product.