A report out of Korea’s ET Times suggests that both the LG G3 and the LG G Pro 2 planned for this year will come with a fingerprint reader after the trend was popularized by Apple with the iPhone 5s. It’s unclear how accurate this new intel is given that LG has not announced either phones, though the G Pro 2 is speculated to launch around Mobile World Congress next month while the LG G3 would launch later.

The LG G Pro 2 phablet would succeed the current G Pro offered through AT&T and the LG G2 would replace the current LG G2 flagship.

Given that the LG had stated when it launched the G2 flagship last year that buttons should be placed on the rear of the phone as that is the most ergonomic position, likely the G3 will continue with that tradition and the fingerprint scanner would be placed on the rear of the phone as well. Though the report suggests that these phones will come with a fingerprint reader on-board, it’s unclear how LG will implement this technology. On Apple’s iPhone 5s model, the TouchID implementation allows users to just place their finger on top of the home button and then the reader will scan the fingerprint. HTC’s implementation of a similar technology on the flagship One Max phablet is much different, requiring users to swipe their finger across the reader, rather than a stationary placement. Though neither implementation is 100 percent accurate, it’s reported that Apple’s implementation was a bit better at recognizing fingers than the older swipe method. 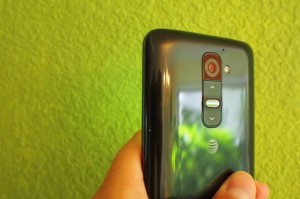