LG has announced what it’s claiming to be the world’s first all-in-one desktop running Chrome OS. The LG Chromebase, as it’s called, looks like your typical all-in-one machine with a 21.5-inch 1080p IPS display and the internal guts tucked in behind it.

The Chromebase sports a yet-to-be-specified Intel Celeron processor, 2GB of RAM and a 16GB solid-state drive. The Chromebase also has an HDMI input that allows you to use the all-in-one as a monitor for your primary computer, but seeing how it’s a full-fledged computer, we don’t think that an external monitor will be the Chromebase’s primary function. 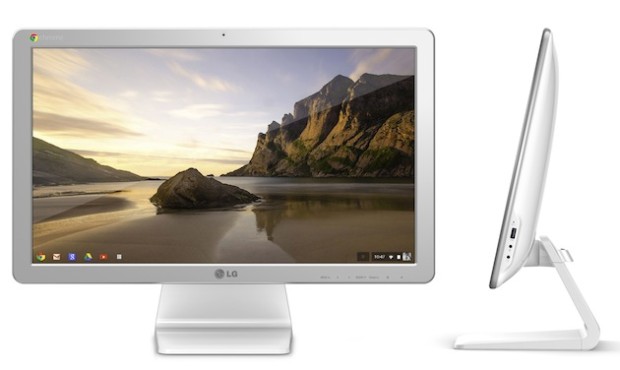 However, LG says that it isn’t necessarily targeting the Chromebase at individual consumers, but rather businesses and educational institutions. You’ll most likely find these in schools, hotels and other public places that allow for public access to computers, although Chrome OS isn’t that well received in the general public, and most people will just want to use a Windows machine.

Then again, seeing as how versatile Chrome OS is, it comes in handy at schools and such. A student can log into any Chrome OS computer and have their stuff show up instantly, since everything is stored in the cloud and not locally on an individual computer.

Unfortunately, LG is saying when we should expect the Chromebase to launch just yet, and the company also isn’t providing a price, but it will officially introduce the machine at CES 2014 next month, where we’ll most likely get more information about the new computer, including availability and price. Most Chrome OS computers today are small laptops that cost as low as $299 (and sometimes even lower), so we wouldn’t expect LG’s Chromebase to cost any less than that. In fact, it might be a bit more expensive than your typical Chromebook, but we’ll have to see what LG decides come January.