T-Mobile is busy shaking up the industry, and LG is trying to do the same with curved and flexible smartphones like the G Flex. Offering a plastic screen that is resistant to breaks, bends if you sit on it, as well as a few other neat features in a rather unique smartphone. Just as expected the phone is available starting today from T-Mobile stores and online. 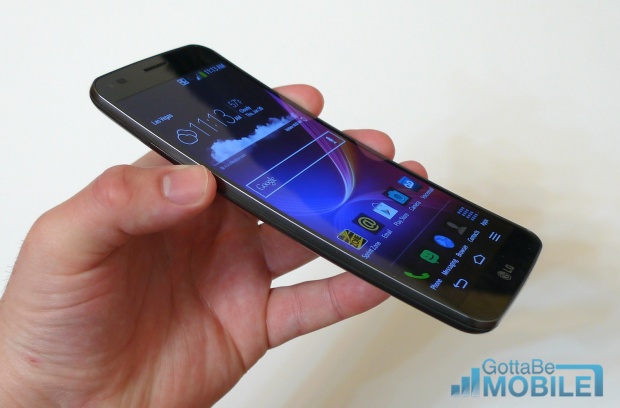 LG’s G Flex has a lot of unique features to offer. Overall it’s a rather large smartphone with well-rounded specs, but a big price tag. The phone is $299 with a new contract from most carriers, but T-Mobile doing away with contracts you’ll be spending $672 outright, or $28 per month with their monthly payment plans.

The price gets you a large 5.9-inch smartphone with a curved P-OLED display. Sadly there’s only Android 4.2 Jelly Bean on board, but we’re hearing an update to Android 4.4 KitKat is coming shortly. Below is a video of the Sprint model, but it should give potential buyers a great idea of what to expect from the device on T-Mobile.

Powered by a quad-core Snapdragon 800 processor and 2GB of RAM, an 8 megapixel camera, buttons on the back, and an infrared port for a remote control. It’s a powerful device, but does have a few downsides. The 5.9-inch screen is only 720p, and not 1080p like most phones available today. And as mentioned above, has an aging and old version of Android.

The LG G Flex is now available from Sprint, AT&T, and T-Mobile so head into the nearest T-Mobile store today if you’re interested in this curved and flexible Android smartphone.