Though official U.S. availability through carrier channels has not been announced yet for LG’s flexible display G Flex smartphone, leaked press shots for the phone shows off that the device could arrive on AT&T Mobility and T-Mobile USA. Still, at this point, we don’t have an official announcement date nor availability timeline for the phone on either carriers.

What we do know from the press shot is that the AT&T model shows a date of March 17, a Monday, on the lock screen and the T-Mobile edition displays a date of Wednesday, February 12. Though not always indicative of an actual launch, the dates suggest that these devices will be arriving in the next few months, not immediately. 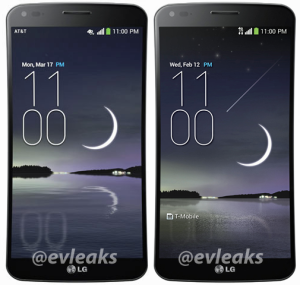 The images were posted by @evleaks of Twitter fame who is often a reliable source for leaks.

In addition to U.S. carriers AT&T and T-Mobile, the LG G Flex is also rumored to be Sprint-bound as well.

The device features an innovative design utilizing a flexible display panel that allows the LG G Flex to be flexed and stressed, though users still cannot bend nor fold the display. The panel is encased in a plastic display so that it is more durable to abuse than a phone with a glass screen. The LG G Flex represents one of the first flexible display phones to come out and its main rival is the Samsung Galaxy Round.