When LG debuted its curved LG G Flex smartphone, there were a few features that stood out about the phone’s claimed resilience to damage that we noted. The first is a self-healing plastic back cover that will “heal” any minor scratches, which is great for OCD folks who want to keep their phones new and shiny over time but would rather not use a skin or a case. 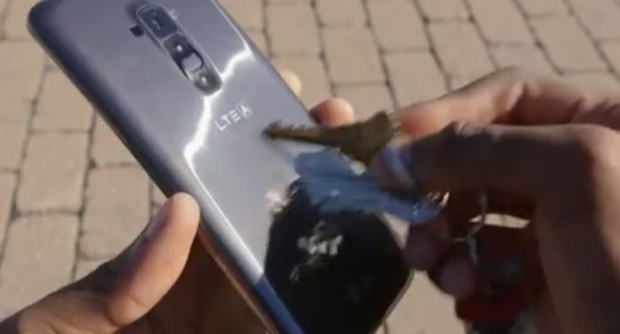 It looks like both of LG’s marketing claims regarding the toughness and “self-healing” properties of the LG G Flex hold true. YouTube user Marquees Brownlee had obtained the flexible display phone and put it up to the challenge under some stress conditions, and the phone does in fact heals itself when subjected to tests.

According to Brownlee, the plastic casing on the back is a high gloss plastic finish, similar to what rival Samsung had employed on the flagship Galaxy S4, which means that scratches and scuffs will show up quite visibly. Fortunately, with the G Flex, when keys were used to scratch the phone, the back did recover, though not 100 percent. Still, scratches became less visible, and Brownlee says that the healing time could be accelerated under warmer conditions.

As far as stress flexing, Brownlee repeated the same test that we’ve seen LG performed earlier and the phone holds up well.

All in all, even if the display is fixed, which means a user can”t fold it or shape it how they would want to, flexible displays, like the one LG is using on the G Flex, still offer a lot of benefits to the consumer. The phone is durable and will withstand drops and dings better than a glass screen.