The LG G Flex is no surprise by now, and is readily available from a few carriers outside of the US, but today we’re getting another look at the smartphone at CES before the device launches across the US.

Just this past week images leaked confirming LG’s plans to offer the curved and impressive smartphone on more than one carrier throughout the US, starting with both AT&T and T-Mobile, and eventually others such as Sprint and possibly regional carriers, not to mention is set for an early January release in the UK. This phone is a rare device for now, but we’re expecting plenty like it in the coming weeks and months. 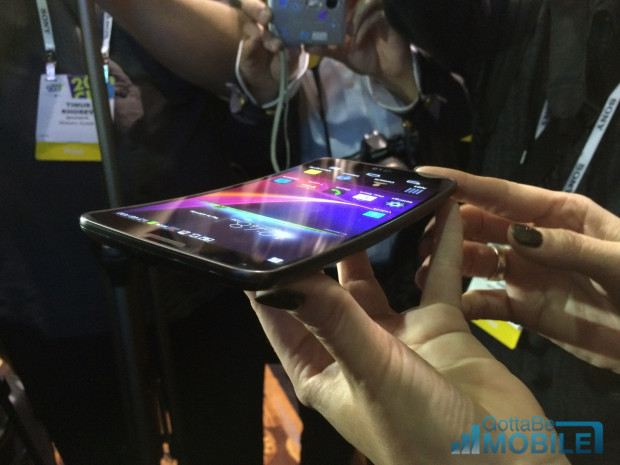 While the Samsung Galaxy Round made the claim for the world’s first curved smartphone, LG took a different approach and made the length curved, not the width, and then made the entire device flexible and bendable like never before. Adding healing properties to the rear casing and a front display like nothing before it, being plastic, it’s quite the device.

Here at CES 2014 in Las Vegas LG is showing off the device one more time, of course again with no US branding to keep things a secret, for now, and we took the moment to snag a few pictures. LG has big plans in the US, and elsewhere for the curved phone, but no addition details were revealed on the showroom floor. 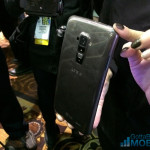 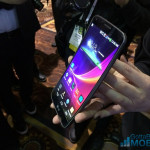 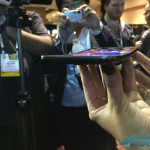 As for specs, LG has a powerful handset under that curved 5.9-inch P-OLED display (the P is for plastic). Offering a quad-core Qualcomm Snapdragon 800 processor running at 2.3 GHz with 2GB of RAM, 16GB of internal storage, and a new 13 megapixel OIS camera with a dual-stage flash system. Then below the camera and flash is the familiar rear-mounted power button accompanied by the volume up/down rocker, unlike any other smartphone aside from the LG G2.

In the hand the large device is odd to hold, but surprisingly comfortable, and the curved design is certainly interesting. We’ll need to spend some more time with the US models before we give an opinion, but it’s quite large coming in at 5.9-inches.

While the Korean model was being shown off here today, we’ve just received word the device is headed to AT&T, Sprint and others in Q1 and will have more details shortly.