This afternoon LG Electronics announced the G Pro Lite smartphone to compete with other big screen smartphones, only this will be geared for emerging markets. With a large 5.5-inch screen but wallet and budget-friendly specs, the LG G Pro Lite is no flagship smartphone although it looks quite promising.

LG explains the new phone as a device that combines a large screen and high capacity battery with all its software and multimedia features all into a smartphone for those on a budget. We heard reports of a cheaper alternative to their 5.5-inch G Pro phablet was coming, and this is what they had in mind. Below you’ll find additional details and specs on this smartphone for emerging markets. 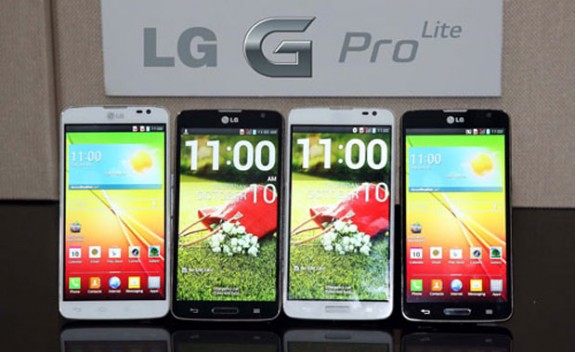 Similar to Samsung’s Galaxy Mega we talked about earlier this week, the G Pro Lite has most the features many smartphone owners come to expect, but a few key areas have been dropped to help reach a lower price point. For example the large 5.5-inch display doesn’t come in with a full HD resolution, and instead you’ll get a 540 x 960 qHD display. So don’t expect iPhone Retina quality here.

The G Pro Lite comes with a dual-core 1 GHz processor and 1GB of RAM, and users will get 8GB of internal storage as well as micro-SD support for adding additional storage when needed. You’ll also enjoy an 8 megapixel camera, a built-in stylus for taking notes right on the large screen, and a huge 3,140 mAh battery that should last well over 24 hours.

There’s no 4G LTE support, which makes sense if this will be for emerging markets, and it’s also running an older version of Android with 4.1 Jelly Bean on board. Right on the heels of Google announcing Android 4.4 KitKat. So the software is a bit outdated.

Recently we’ve heard reports of Samsung releasing a budget friendly version of their new Note 3, so this could also be LG’s answer well ahead of time. No price was released, but it’s clear LG is aiming for the budget crowd. The new LG G Pro Lite will make its world debut late October in Latin America followed by markets in Asia, Russia, China, India and the Middle East. We then expect it to hit region carriers and pre-paid options here in the US.