After months of waiting for more details surrounding Google’s all new Android-based wearable OS called Android Wear, we now have all the details. Today live during Google I/O the company just announced two brand new Google-powered smartwatches will be available today on the Google Play Store.

Recently all the rumors have been about the upcoming and impressive Moto 360 smartwatch, and while we’ll have to wait for another month or so to buy it, starting later today two brand new options will be available. Both the LG G Watch, and the mystery Samsung Gear Live were just announced.

Google has been busy all morning showcasing what’s next for Android with the L release, Android in the car, Android TV, and of course Android Wear. For weeks we’ve been hearing these watches were coming soon, and now we know two will be available for pre-order later today, and will ship July 7th. 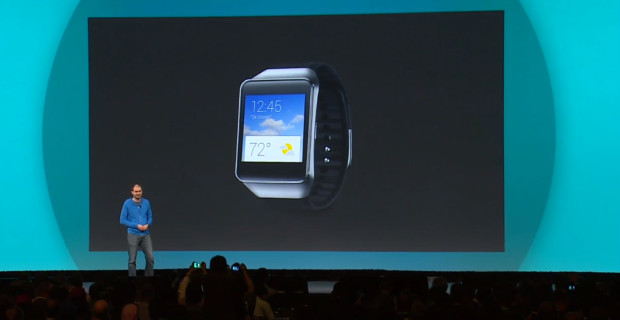 Back in March Google finally announced its plans to take on wearable devices with Android Wear. A new mobile operating system that will be tailored around the small screen on your wrist, or other wearable devices. The smartwatch is the key focus for now, but we can expect Android Wear to continue and evolve over the coming months.

With Android Wear Google’s smartwatches will simplify our lives, and they’re really pushing that home in the keynote live on stage this afternoon. Any app that supports Android Wear only needs to be installed on your phone, and the smartwatch bits, controls, and useful notifications automatically pair. Everything from answering phone calls, denying them with a text message, getting navigation directions and more are all just a swipe away, all from your wrist.

Over the past few weeks we’ve been hearing a lot about Android Wear, and the LG G Watch, but details are still rather light regarding Samsung’s new Gear Live. Earlier this week we learned they’d possibly join LG and Motorola at Google I/O, but no one expected them to be ready to launch today.

So what about pricing? Moments ago live on stage Google confirmed both the LG G Watch and Samsung Gear Live Android Wear smartwatches will be available today. Right from the Google Play Store. However, no pricing was release yet, although rumors have the G Watch coming in at $249.

Sadly the impressive looking around round Moto 360 won’t be available until “later this summer” which was what many prospective buyers were patiently waiting for. That being said, if you’d like to enjoy Android Wear and get your hands on what Google’s build for the smartwatch, expect both the G Watch and Gear Live to hit the Google Play Store later today.