The highly anticipated LG G2 Android 5.0 Lollipop update has finally started rolling out to more and more owners this month. Today we’ve learned that ahead of the LG G3 Android 5.0 update, those with a Verizon LG G2 can expect the update to arrive starting today.

The LG G2 was LG’s first smartphone with buttons on the back from LG, and it was rather popular when it arrived in late 2013 to take on the Galaxy S4 and other smartphones in its class. And while we’ve been busy talking about the LG G3, or even the lightly rumored LG G4, there are still millions of LG G2 owners waiting for updates.

Back in August last year LG confirmed the G2 would see Android 5.0 Lollipop, and in December it rolled out in Korea and a few other regions. We’ve seen a few LG G3 Android 5.0 updates arrive as well, and now today more owners with the popular LG G2 are getting the same update. Below are a few additional details for those with a Verizon or T-Mobile LG G2. 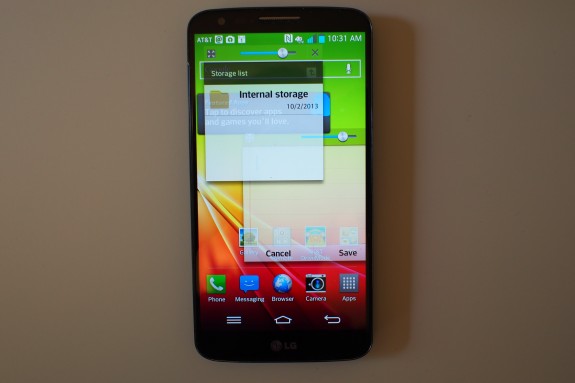 This morning Verizon announced and confirmed the LG G2 Android 5.0 update is now rolling out, and users an expect it to start arriving today, or over the course of the next week. All of the information and update details are explained in the link above, as well as talks about what’s new, what to expect, and how the user interface will now line up with the LG G3 look and feel. Not to mention a few additional new features that arrived with Android 5.0 Lollipop. 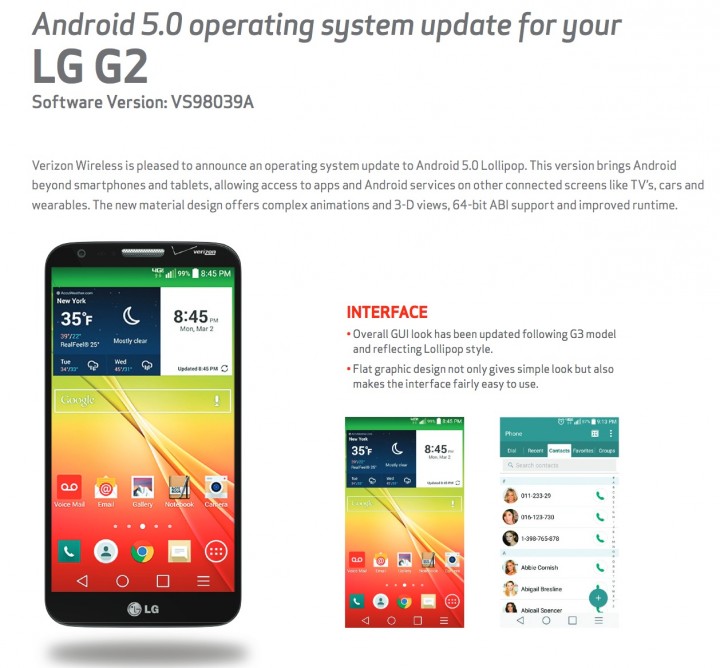 Users can expect a flat and modern styled user interface with many tweaks and improvements delivered with Android 5.0 Lollipop. Some of those include better battery live, smooth performance, enhanced notifications and a new notification pulldown bar, better lockscreen options and lockscreen notifications, and more. Not to mention some of the animations and effects delivered by Google with Android Lollipop. We’ve yet to try it ourselves, but this should fix many of the key issues that Android 4.4 caused for LG G2 owners. The update will bring your device to Android 5.0.2 Lollipop, not the latest Android 5.1 released earlier this month.

The Verizon LG G2 Android 5.0 update is arriving before the G3, surprisingly, but this also means that it should be coming for Verizon G3 owners in the near future as well. Many other carriers have seen G3 updates, but it has yet to arrive for Verizon Wireless.

Those with an LG G2 can head into settings > about phone > and check for updates manually, otherwise the update should arrive as an over the air update. It’s advised you update over WiFi, as the update is quite large, and the link above has a few details for owners before accepting the upgrade.

That said, there’s also a possibility of the T-Mobile LG G2 getting Android 5.0 this week too. Last weekend T-Mobile updated its community website where they detail incoming software, and changed both the LG G2 and LG G3 Android 5.0 updates from development, to “T-Mobile Testing” meaning the updates have been completed, and they’re under the final testing phase before they begin rolling out to all owners.

We’ve heard a few reports of owners on T-Mobile also getting the update, but that announcement has yet to be made official, nor have we seen it ourselves. For now though, those on Verizon can expect it to arrive any time now, and T-Mobile LG G2 owners should be close behind. Let us know how the update process goes, if you experience any problems, and we’ll update the moment we know more.