At an event in New York City, LG has finally announced their latest flagship device meant to take on the Samsung Galaxy S4 and Apple iPhone 5, the LG G2.

By anyone’s standards the LG G2 is a powerhouse. Inside, the device features a Snapdragon 800 processor. In today’s presentation an executive from Qualcomm, maker of the Snapdragon processor repeatedly indicated that processor makes the LG G2 the obvious choice for power users. The processor features four processing cores capable of speeds up to 2.3 GHZ per core. Qualcomm says it’s also done extensive work in keeping power consumption in check while enabling next generation data standards like LTE Advanced and support for 4G. This processor is backed by 2GB of RAM. 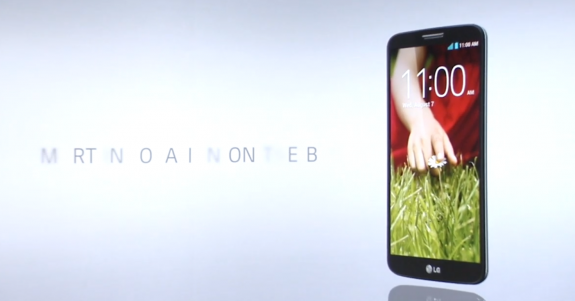 Like many other high-end Android smartphones, the LG G2 doesn’t have physical Home, Menu and Back buttons. Instead, the device will render digital versions of each button on its screen when in applications. Video playback will still use the entirety of the device’s 5.2-inch IPS display. According to today’s press release, that screen actually has a resolution of 1080 x 1920 pixels.

LG is also making a big deal out of the refreshed camera hardware in the LG G2. This device will use optical image stabilization technology to cut down on the jerky movements that result from not being able to hold the smartphone as still as some camera optics require. As LG is really pushing the LG G2 as more of a life-style choice than a smartphone, being able to record memories perfectly in any condition is key to the device’s appeal with consumers. With a resolution of 13 megapixel, the G2 will likely make pretty good use of that technology.

Though innovative, the technology isn’t entirely new, Nokia uses optical image stabilization to great effect in its high-end Lumia Windows Phones. Although it does improve picture and video quality, it’s unclear if the technology is actually resonating with consumers in a way that they actively look for it in their smartphones.

LG says that it’s spent “countless hours” designing the hardware of the LG G2 so that it makes living with a smartphone more convenient for users. According to the company, the device’s screen is the largest that users can comfortably hold in their hand and still have a firm grip. It’s moved the volume buttons to the back of the device as part of its work to keep the device usable. It’s also introducing it’s own advanced sound technology akin to the Beats Audio functionality that’s included in many of HTC’s smartphones.

The LG G2 also has a front-facing camera that can be activated by those rear-facing volume buttons.

The LG G2 will a launch on T-Mobile, AT&T, Verizon and Sprint this year, though LG will leave it up to each carrier to make their own specific announcements on availability. The device will come in black or white.