Verizon and T-Mobile aren’t the only networks poised for a lunch of the LG G2. Following announcements from both of those carriers, AT&T says its users can expect LG’s latest flagship device to arrive on the carrier on September 13.

According to the carrier’s press release, users will be able to pick up the device on that day for $199 with a two-year service agreement, or $27 per month, as a part of the AT&T Next program. The LG G2 will launch tomorrow, September 6th, on the carrier’s website.

While AT&T will be the first of the four largest carriers in the United States to sell the device online, it doesn’t seem like AT&T users will be providing any exclusive features for their version of the device outside of loading it with AT&T Radio and many of the other applications it typically puts on Android devices sold through its online and retail stores.

Users anticipating the device’s launch on the carrier likely won’t care, however. That’s because the LG G2’s specifications are a smartphone power user’s dream. 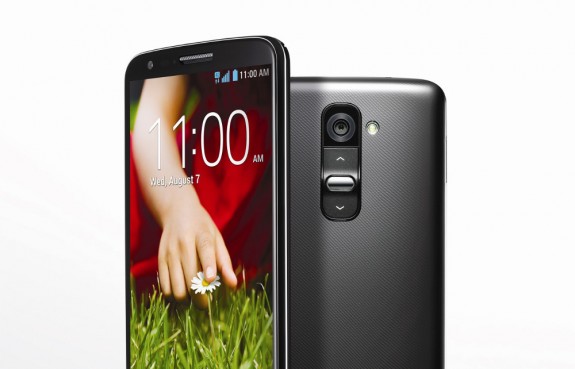 The LG G2 features a plastic back with a volume rocker.

The LG G2 features a 5.2-inch IPS display that is fully capable of playing back high-definition video. It’s also the first device in the United States to feature Qualcomm’s Snapdragon 800 processor. While it includes four processing cores just like most devices on the market, NVIDIA is promising that optimizations for performance and battery life the processor includes will put it miles ahead of the processors included in the Samsung Galaxy S4 and HTC One.

Read: LG G2 Arrives to take on Galaxy S4 as A Mobile Companion

The LG G2 will also be the first flagship device from the company to feature OIS, or Optical Image Stabilization technology, for its 13 megapixel camera. Other smartphones on the carrier offer the technology, particularly the Nokia Lumia 920 and Nokia Lumia 1020, but both devices pay for the feature in terms of device thickness and heft – something the LG G2 has been specifically designed to avoid.

LG is breaking new grounds in certain areas, but it’s also borrowing some tricks from devices that debuted earlier this year. Like the HTC One, the LG G2 features its own speaker enhancements called Hi-Fi Sound, and the ability to control television sets using a built-in infrared port and application are also a part of the Galaxy S4 and the HTC One’s feature set.

While AT&T users will be able to purchase their device first, the LG G2 won’t be arriving to them first by much, Verizon’s version of the device is scheduled to launch September 12th with T-Mobile’s device scheduled for September 18th. T-Mobile will be offering the device to users for $100 down, while Verizon’s will match AT&T’s pricing at $199.