Following a successful launch of a gold iPhone 5S we saw many other manufacturers eventually offer something similar, and now LG is looking to join the stylish fun.

After Apple we saw an HTC One in Gold, as well as a few gold phones from Samsung with the Galaxy Note 3, and now a James Bond looking “Gold Edition” LG G2 is apparently in the works and could be released next month. New leaks courtesy of ePrice have confirmed the new color option, as well as the price. 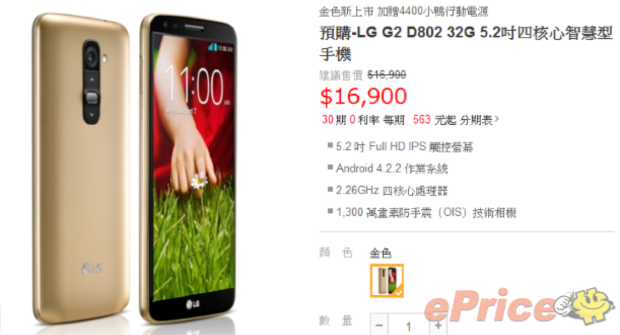 Found overseas in Taiwan, the new LG G2 Gold Edition won’t be a fancy smartphone with a huge price tag. Instead they’ll take the same approach as the many others and merely paint the back gold to keep it affordable. According to the leak the Gold Edition G2 won’t cost any more than the current model, it’ll just be a different color.

So while HTC has full-out 18k Gold smartphones for a few thousand dollars, LG fans will be able to get the 5.2-inch flagship G2 for the same price as the others.

ePrice states the device could go up for sale in the coming months, but that’s just for Taiwan, and at the moment there’s no confirmation or details regarding a launch elsewhere. As a reminder the 5.2-inch quad-core smartphone runs Android 4.2.2 Jelly Bean, and should be getting KitKat soon in regions outside of Korea, and has those unique power and volume buttons on the back rather than the sides.

If you fancy gold, the LG G2 may soon have that as an option.