With Mobile World Congress just a few weeks away, where we expect to see the new Samsung Galaxy S5 and possibly something from HTC, LG is leaving nothing to the imagination by revealing its cards ahead of the annual show in Barcelona.

Today LG Electronics took to Facebook and announced the all-new LG G2 Mini, which will make its official debut and be fully revealed come February 24th. The company has been dropping small details regarding a few phones ahead of the show, and today they’ve added one more. While most the attention is on the LG G3 and Galaxy S5, the G2 Mini could steal the show. 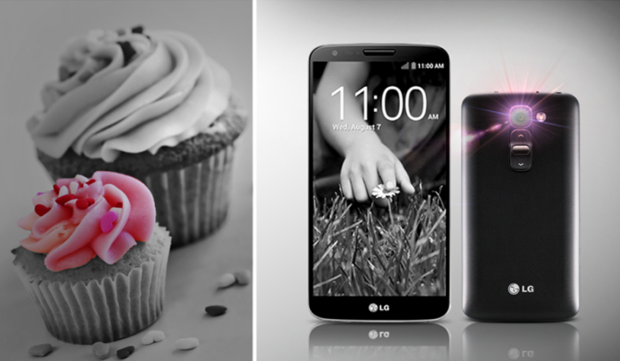 Teasing customers on Facebook LG dropped the photo you see above, followed by “Experience the Mini” at Mobile World Congress in Barcelona, Spain on the 24th of February. So far they’ve yet to reveal any other details regarding the phone, but the photo does give off a few clues as to what users can expect.

For one, you’ll instantly notice Android 4.4 KitKat white icons and font in the notification bar clock on the LG G2 next to the Mini sibling. Which means we could see KitKat arrive for the G2, and the Mini launch with the latest version of Android already in tow.

Secondly the image shows only the rear of the new Mini, and there’s no specs to go along with the photo. The HTC One Mini and Galaxy S4 Mini from 2013 both arrived with mediocre specs, and wouldn’t be considered top-tier, so hopefully LG offers up something impressive in the smaller form factor. Most LG phones of late have a quality camera with optical image stabilization, and the flash in the teaser image could be hinting towards the same camera-centric features. Then the unique rear-button design is obviously on board.

It looks nearly identical on back to the original 5.2-inch LG G2 from last year, so we could see similar specs in a smaller package. Those being a quad-core processor with 2GB of RAM, 32GB of internal storage, and a large battery for all-day usage. However, with no leaks thus far we’re stuck waiting for more details once LG announces everything live in Spain later this month.