Owners with the LG G3 on AT&T, Sprint and T-Mobile have already received the latest software, and Verizon started it but then quickly delayed the release, and it was missing in action until this weekend. It was available online as a wired update with Verizon’s software, but is now arriving over the air.

LG’s promised to deliver the Android 5.0 Lollipop update within 90 days for owners, which it met, but not in the US. In December it hit Korea, India, Poland, and parts of Europe, then parts of the US in February. Those with a Verizon LG G3 will want to read on below for more details, some possible Android 5.0 bugs, as well as fixes for a few of those issues.

Last year LG announced its brand new flagship G3 smartphone in May. Delivering one of the best overall devices in 2014 with top-tier specs, an impressive 5.5-inch Quad-HD display like the Nexus 6, and extremely small bezels delivering a big screen in a small package. Those waiting for the update to Android 5.0 Lollipop will be happy to know the rollout is going smooth, and now it’s hitting even more users.

Typically updates come as an over the air (OTA) software update. A notification arrives on the users device prompting them to download and install the update, and the entire process typically takes less than 5-10 minutes. However, the Verizon G3 first received it via the Verizon software assistant update tool if owners plugged the device into a computer, and now it’s rolling out in the typical fashion as well. Both options are available. 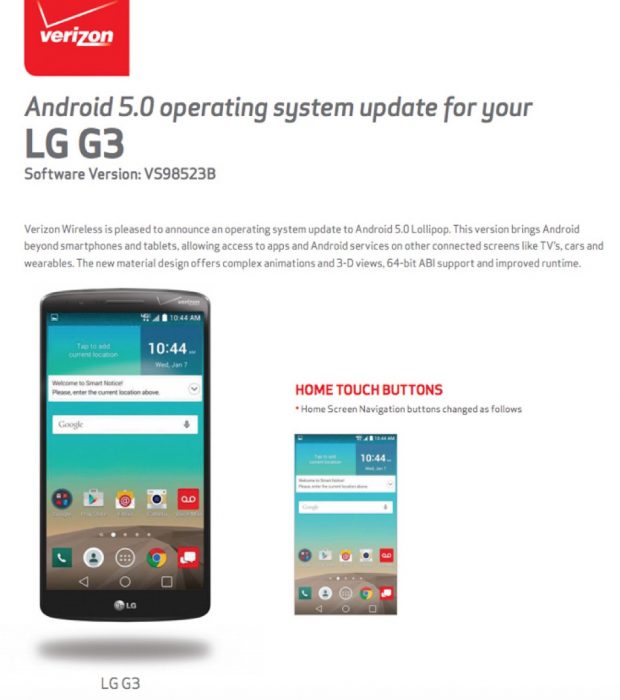 This morning Verizon updated the LG G3 support pages with all the details, confirming the update will start going out via the an over the air update process starting today, April 13th. This will be a rather large update, so have a WiFi connection handy and enough battery to complete the install.

The LG G3 update will be delivering a new look and feel to the Android operating system. With Android 5.0 Lollipop users get more features, an improved notification tray and lock screen, neat animations and effects, improved battery life (for some) and a lively feeling operating system.

So far we’re hearing most LG G3 owners on AT&T, Sprint and around the globe are enjoying the update, at the same time there’s also a large amount of users that are frustrated with problems after the LG G3 Android 5.0 update, so users should proceed with caution. It’s always safe to backup software, settings, apps, pictures and more before accepting the update, as it’s better to be safe than sorry.

Some users are reporting app crashes, device reboots, poor battery life and more, while others have nothing but positive comments regarding the update. Below is a link to a few problems you may run into, and some potential fixes. That all aside, the update is still worth accepting simply for the fact that it’s Android 5.0 Lollipop, but a factory data reset may yield the best results for owners.

As always, owners can head into settings > about phone > system updates > and check for the latest software. That, or you can wait for it to arrive, or plug your Verizon G3 into a computer and use the software upgrade assistant tool provided by Verizon Wireless. Give it a try, and drop us a comment below after you’ve installed Lollipop and let us know how it’s running for you.