LG G3 Features & Specs All But Confirmed in New Leaks

The brand new flagship LG G3 smartphone is set to be formally announced to the world at multiple press events come May 27th where we’ll finally learn all the details, and put the rumors to rest.

Leaks and reports have continued to arrive at an alarming rate over the past two months revealing plenty about the smartphone. Just like the HTC One M8 we have a slew of official photos, renders, and more all ahead of the release date.

However, this week an event in South Korea took place and whether intentional or not, the LG G3 was fully revealed. Spotted by GforGames, every important aspect of the device was shown off on stage during an event with full product advertising material and more. and we even have two live images of the device. The LG G3 is all but confirmed at this point, and we’ll hear it all officially come May 27th. 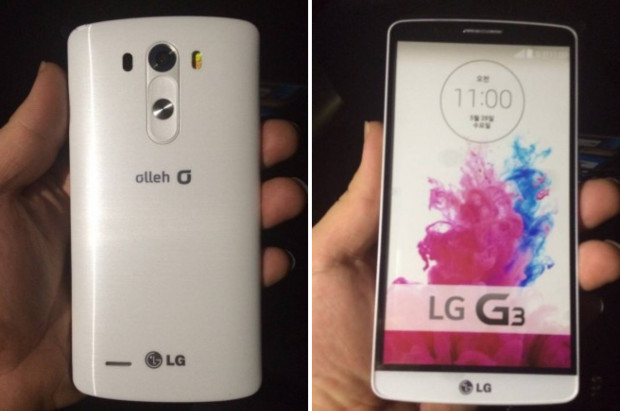 The images and details being provided above and below didn’t come from LG themselves, and rather were revealed by a South Korean carrier with no regard for any release date. Either the device is available now in Korea, or will be soon. So what does this mean for users and prospective buyers in the United States? Well, that a release date is closer than we may of originally thought.

Images were leaked on a few forums, and the image below is a full spec sheet revealing all the key details ahead of the release date. It’s safe to say the LG G3 is fully confirmed at this point, as well as the final details. While a US variant could be slightly different from what’s shown in the advertisement below, that’s most likely what we can expect to arrive stateside on multiple carriers next month.

Last week another round of images leaked along with the few remaining important and key details we’d yet to hear, and those are all essentially confirmed here today. We know nearly everything already, and this just assures us that almost every rumor we’ve heard the past 2-3 weeks were mostly correct. 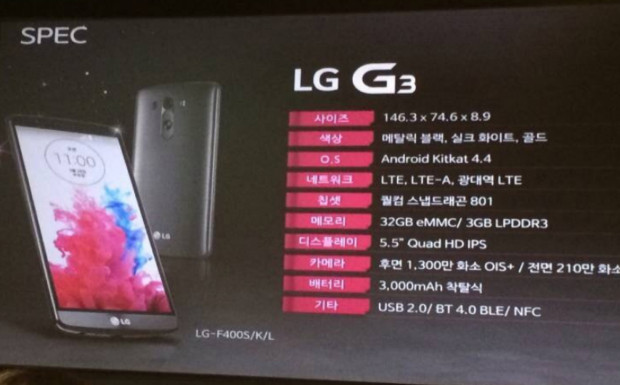 Details from @evleaks confirmed the screen months ago, and countless press renders gave us an excellent idea of what to expect well ahead of the release date. However, one thing that still could be a mystery is the processor, as international models usually differ from those in the United States, just like the Galaxy S5 international version vs the US models.

With that being said, above we can clearly see the important things being confirmed. Those being a 5.5-inch Quad HD IPS display, so no Samsung Pentile screen. The size chart brings this device in at a size barely bigger than the LG G2, and very similar in size to the 5.1-inch 1080p Galaxy S5, only the LG G3 has a 5.5-inch Quad HD display.

This leak confirms the standard model with have 32GB of internal storage, but we could still see a lower priced 16GB model in the United States, especially since the LG G3 has a micro-SD slot for user expandable storage. There’s also confirmation of 3GB of RAM, a 13 megapixel rear and 2.1 front camera setup, and talks of OIS+ are included. A rumor last week revealed the sensor to the left of the camera is an all-new laser auto-focus, but we’ll have to wait until the 27th to learn more.

Android 4.4.2 KitKat is on board, and last month leaks of a new software interface confirmed a flat and more simply user interface, circle weather and clock widgets as shown above, and a new virtual assistant and Siri-like service will be built into the G3 provided by LG. The device will have a 3,000 mAh battery, not 3,200 like leaks suggested, but wireless charging is built-in.

The video above is the first and only teaser we’ve received thus far from LG regarding the new smartphone. One thing you’ll notice aside from the aluminum-like design, thin bezels, and rear-facing buttons, is the speaker seems to be bumping quite hard in the video. While the LG G3 doesn’t have front facing speakers like the HTC One M8, the materials leaked this week claim a “1 Watt Booster AMP” will be on board for stunning and excellent sound output. Hopefully this helps the built-in speaker be loud and crisp, and headphone users experience better audio fidelity.

As a reminder the LG G3 will officially be announced a simultaneous events in London, NYC, and SF on May 27th, and potentially released within 1-2 weeks of that date. We’ve been hearing early June time and time again, and last month LG confirmed the G3 will be available around the globe before the end of June.

Stay tuned for more details as we’ll be live in San Francisco with all the details and hands-on video.