This LG G3 review shares how the LG G3 compares to the iPhone 5s, helping potential buyers know how the LG G3 performs from an iPhone user perspective.

After using the Verizon LG G3 as my main device, and still carrying my iPhone 5s it became clear that LG nailed the Android experience combining a large high-resolution display with a great camera and software features that match the iPhone in many areas and beat it in others.

Our early LG G3 review gave the phone an Editor’s Choice Award thanks to the amazing features this phone offers, and the Verizon LG G3 earns this same honor.

If you are trying to decide between the iPhone 5s or iPhone 6 and the LG G3 or are looking to upgrade to the LG G3 from an iPhone this LG G3 review from an iPhone user will help you understand what the LG G3 does better and where you will need to make some concessions. 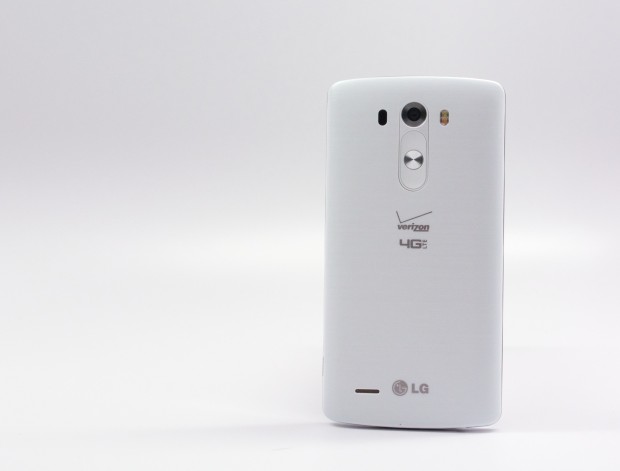 Read our Verizon LG G3 review from an iPhone user.

I’m using a Verizon LG G3 review unit, which includes pre-installed Verizon apps and connects to the speedy XLTE Verizon network, but the basic LG G3 review from an iPhone user points are the same across other carriers as well.

One of the biggest differences between a Verizon LG G3 and those on AT&T, Sprint and T-Mobile is coverage. Despite many advances there are still places I travel in Ohio where Verizon is the best or only option. This varies from place to place, so check your area before you switch. My home neighborhood delivers vastly better AT&T service, but when I go on trips Verizon is typically a better source.

During my time with this LG G3 review unit I also carried a Verizon iPhone 5s, which I carry alongside an Android phone of some type daily.

The LG G3 display is bigger and delivers more detail than the iPhone 5s. The LG G3 features a 5.5-inch 2k display. iPhone users are familiar with the 4-inch Retina display on the iPhone 5s and iPhone 5, but may not know the resolution which makes an on-paper comparison easier. 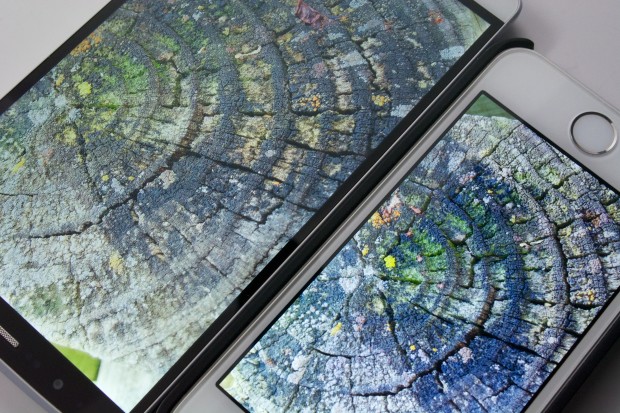 Notice the difference in the detail of small pieces of moss on this fencepost between the LG G3 vs iPhone 5s displays.

The photo above offers a LG G3 vs iPhone 5s screen comparison which helps show the detail that the LG G3 can deliver when looking at a photo.

Compared to the iPhone 5s, the Verizon LG G3 display is significantly larger than the iPhone. The 1.5-inch difference makes a bigger difference than you might guess, but thanks to the LG G3 design the phone is not obscenely large.

Watching movies, browsing the web and playing games on the LG G3 is a more immersive experience thanks to the large display. I still opt for a tablet when I can, but if I am just running around end up with time to waste I grab the LG G3 for entertainment needs before the iPhone.

The back of the LG G3 is curved, helping users hold it with one hand.

The iPhone 5s design and LG G3 design both offer benefits, and important differences. The biggest differences are material and access to battery and storage.

Apple designs the iPhone 5s with metal and glass. This is the standard for great smartphone design that plastic will not touch for many users. I was surprised by the feel of the LG G3 design because it uses plastic instead of metal, but it is a high-quality plastic that almost feels like a ceramic. It’s not going to match the feel of aluminum for every user, but it is close enough for me. The biggest reason for this is that it doesn’t feel like a cheap plastic phone. 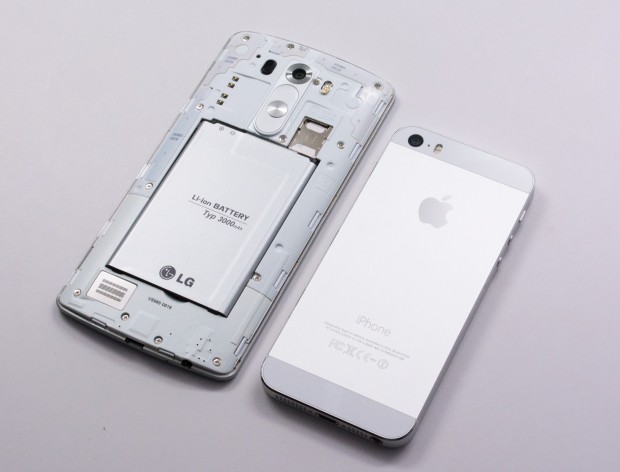 Pop the back off to add storage or a spare LG G3 battery, but you can’t do that on the iPhone 5s.

Part of the plastic LG G3 design is the ability to remove the back for access to a battery that you can swap out if it runs dead and a MicroSD card slot that lets users add more storage. The iPhone 5s offers neither of these options, though you can buy a case to add storage and battery power for $150 or more. A spare LG G3 battery is $30, though not on sale in stores yet, and a 64GB MicroSD card is $36 on Amazon. It’s nice that I can add storage later instead of buying it right off the bat. The LG G3 also comes with 32GB of memory instead of 16GB standard.

The back of the LG G3 is curved and the edges slope up to help with grip and one-handed use. For a larger phone this is essential, and it combines with small bezels to keep the size of the LG G3 as small as possible. Apple opts for a flat back and chamfered edges on the sides. The LG G3 would not work with the current iPhone design, but the iPhone 5s is still a very nice size and feel.

The G3 is much larger.

The G3’s plastic back feels better than plastic, but it’s not the iPhone 5s’ aluminum back.

The front of the G3 features a large Verizon logo.

The LG G3 does not include front facing speakers like the HTC One, but the single rear speaker out performs the iPhone 5s speaker hands down. The G3 delivers louder, better sound that I can hear in more rooms without a bluetooth speaker or tricks to make the iPhone speaker louder.

Call Quality on the G3 varies based on your location and network coverage, but I found call quality slightly better than on the iPhone 5s. Both of these devices are on Verizon, but the G3 delivers crisper call audio. The iPhone does sound dramatically better when I make a FaceTime audio call.

The LG G3 delivers good performance across all activities tested from chat and email to gaming and streaming videos. I did not notice a difference between the iPhone 5s and G3 for these common activities aside from the benefits of a bigger screen.

Google apps like Gmail, Maps and Hangouts work great across both of these devices and streaming apps for common services like HBO Go and Watch ESPN are available on both. You won’t notice a difference switching between these two devices in terms of speed inside the apps. 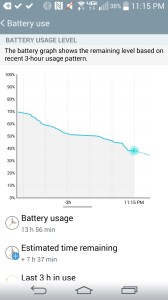 I did not need to use this on most days. On the average day I would end up with 30% of the LG G3 battery life left around 10 PM, after taking it off the charger at 8AM. This includes a few calls, but not the marathon of calls that can drain a smartphone battery quickly. I was pleasantly surprised at the G3 battery life while using it as a hotspot.

My iPhone battery life varies dramatically depending on how much I use it for calls, on days where I don’t talk much it lasts about this long. On days where I am on calls for hours and hours it needs recharged by evening.

For a full in-depth look at the LG G3 camera performance check out our deep dive LG G3 Review, with more sample photos and detailed explanations of how the G3 camera performs. I really enjoy the laser focus, though it does not seem to focus faster than the iPhone 5s, if at all. Both the iPhone 5s and LG G3 deliver good-looking photos and a variety of options to take photos. Neither offers a camera app that is as deep as the Galaxy S5.

The video above shows the LG G3 camera options, and the photos and sample video below show what the LG G3 can do. I am happy using the iPhone or the G3 as my camera while on the go for the past few weeks, but I like looking at photos on the higher resolution LG G3 display. 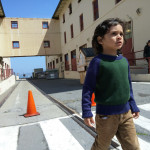 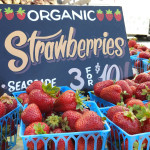 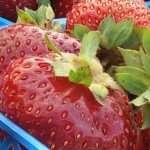 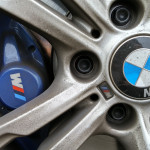 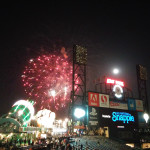 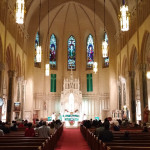 The LG G3 software and apps are very different from the iPhone 5s. This is where users will notice a big difference between the two devices, but not in the negative way we used to see when going from iPhone to Android. Yes, some apps still come to iPhone first and look better on the iPhone, but many of the best Android apps deliver a great experience on Android phones like the LG G3. I still miss some iPhone apps but for the most part I get everything I need on the LG G3.

Rather than list every software feature on the LG G3, I’ll share the ones I use most, that I cannot use on the iPhone.

Knock Code – Tap out an unlock code on the screen, even =when dark, to unlock the phone right to the home screen.

Dual View – Run two apps side-by-side on the screen at the same time for enhanced multitasking.

Remote Control – The LG G3 includes remote control software and an IR blaster on the top so it can control any TV, cable box or home theater.

Pay with Google Wallet – Tap and pay at a retail store with the G3 to make a payment.

The G3 does not include a fingerprint sensor like the iPhone 5s, but I found the Knock Code unlock option an easy replacement for my needs.

Like the iPhone 5s, the LG G3 includes sensors to track activity and it is tracked using a built-in LG Health app. The iPhone offers similar tracking through a Nike app and others, and will add a Health app in iOS 8 this fall.

Verizon bundles a collection of Verizon apps and widgets as well as Amazon apps, Clash of Clans, Hotels.com and Slacker Radio on the G3. They do not include these items on the iPhone 5s. You can uninstall Clash of Clans and Hotels.com, but not Slacker radio and Verizon apps. 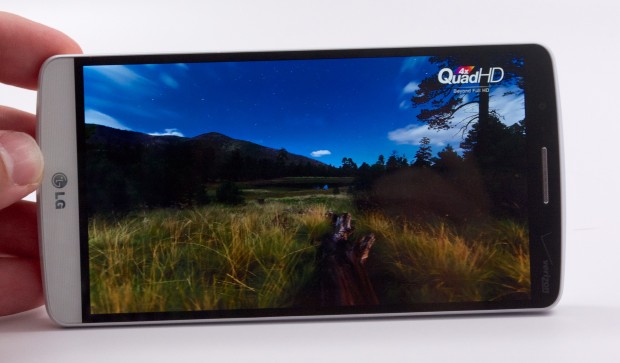 More help deciding between the iPhone 5s and LG G3.

There is no longer a clear winner in Android vs iPhone comparisons. Both phones offer distinct advantages to users and with new software updates the things that you can do on the G3 and on the iPhone 5s become closer and closer.

If you need a big screen that is still easy to use with one hand and love the option to carry a spare battery and add storage, as well as the other handy features like a remote control, mobile payments and knock codes grab the G3.

For users that like a smaller display and cannot leave the Apple apps and accessories behind, the iPhone 5s is a great choice, but it is worth looking forward to the iPhone 6.