This week we have some great news for those with the LG G3. As many owners know, the update to Android 5.0 Lollipop didn’t go smooth, and since the update arrived the device has been riddled with problems and performance issues. That said, today Verizon is delivering a big update that will hopefully address many owners complaints.

Last year the LG G3 was announced and released running Android 4.4 KitKat, and was one of the best smartphones of the year. It’s still an excellent device, but it didn’t benefit from the update to Android 5.0 Lollipop. However, today an update is rolling out on Verizon, although it isn’t the new Android 5.1 Lollipop release.

In recent weeks we’ve seen a slew of Android devices from LG, Samsung, Motorola and even HTC all get updates to the latest Android 5.1.1 Lollipop with lots of software and performance fixes. Sadly, that isn’t here yet for the LG G3, but Verizon is pushing an update out and below is everything users need to know.

Way back in February the LG G3 Lollipop update finally started rolling out in the United States on multiple carriers, following a release in other regions around the globe. After seeing all of the problems T-Mobile even delayed its update to fix a few, but that device is still experiencing most problems that other users and carriers have been dealing with.

In May Google released Android 5.1.1 Lollipop to fix most of the Android 5.0 Lollipop problems, including the big memory leak issue. The memory leak problem was causing apps to slow, crash, reboot, device reboots and more. This still hasn’t been fixed on the LG G3, but below are a few details right from Verizon regarding its latest G3 software upgrade. 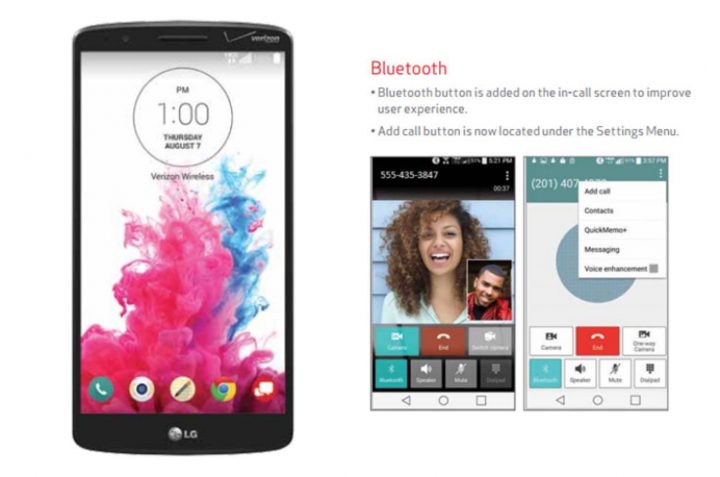 Yesterday, July 9th is actually when Verizon approved the update, and it should be rolling out as of late last night for all Verizon LG G3 owners, and possibly a similar update will follow for the new G4 as well.

According to the release notes and changelog the Verizon LG G3 update brings a new Bluetooth button for in-calls for easy switching between car Bluetooth and regular headset, native Android 5.0 Lollipop do-not-disturb interruption settings, improved quick settings, and advanced calling (HD calling) for improved sound while talking on the phone. Yes, this is all the changelog has to say about today’s LG G3 Android 5.0 Lollipop update.

The changelog doesn’t mention anything, anywhere, about bug fixes or stability improvements, which are generally the only thing changelogs state, which isn’t as much information as users would like. Many were hopeful to see it this time around, hoping for improvements, but that doesn’t appear to be the case.

Most likely there are some software-side behind the scenes changes and tweaks, but we can’t be sure. The Verizon support pages are still filled with complaints, so if this update doesn’t fix some problems, hopefully another arrives or Android 5.1 will be released in the near future to curb many issues owners are facing.

For those with the LG G3 that are still having problems, we’ve put together a list of problems and possible fixes, so give them a try and see if it helps. Otherwise, we’ll be on the lookout for the Android 5.1 Lollipop software update.