A video shows the iPhone 6 screen sizes compared to the Samsung Galaxy Note 3 and LG G3 with a 4.7-inch and a 5.5-inch iPhone. Although this video only uses dummy iPhone 6 units designed by case manufacturers to test the fit of iPhone 6 cases it shows what are likely the top 5 Smartphones of 2014.

This is a major shift for Apple, which only increased the iPhone screen size once so far to 4-inches with the iPhone 5. The new iPhone 6 sizes will bring the screen size in line with the Galaxy S5 and Galaxy Note 3 as well as the LG G3.

In the seven-minute iPhone 6 video from Techsmartt we see the following comparisons, which we go a little further into below new iPhone 6 video. this is an early look at what buyers can expect this fall, and shows just how big the iPhone 6 with a 5.5-inch screen could be with the big bezels currently in use.

Each of these comparisons includes a look at the 5.5-inch iPhone 6, thanks to a new mockup that is leaking out. The bezels on this device make it taller than the Galaxy Note 3 and larger than the LG G3, which also uses a 5.5-inch display, but keeps things manageable with very slim bezels on the sides as well as the top and bottom of the device.

Watch this excellent comparison video to see how big the iPhone 6 may be next to some of the best smartphones of 2014.

The overall design of the iPhone 6 in this video is not a surprise. We see more metal on the back of the iPhone and small bands at the top and bottom that are likely to allow the antennas to work inside the metal case. The edges curve more and the corners are rounder, but the front of the iPhone retains the same overall look as the iPhone 5s. That’s why the 5.5-inch iPhone 6 is so big.

This is not the first time we’ve compared the iPhone 6 screen sizes, but it is one of the best looks at just how big the iPhone 6 will be if Apple sticks with this design on the biggest iPhone they sell. The large bezels add a lot to the size of the phone. Although the 4.7-inch model looks relatively manageable with one hand the largest is clearly a two-hand device as Ming-Chi Kuo predicted. 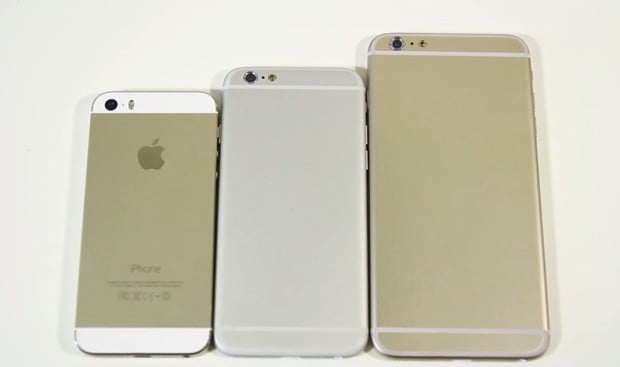 See just how big the 5.5-inch iPhone 6 could be this fall. Image via TechSmartt

It appears that Apple plans to keep the iPhone 6 specs in line across both of these models, which allows consumers to choose based on screen size alone. Although there is no mention of a stylus for the largest iPhone 6 model, iOS 8 does offer better support for third-party smart stylus devices, which could help open up a new role for an iPhone 6 phablet. 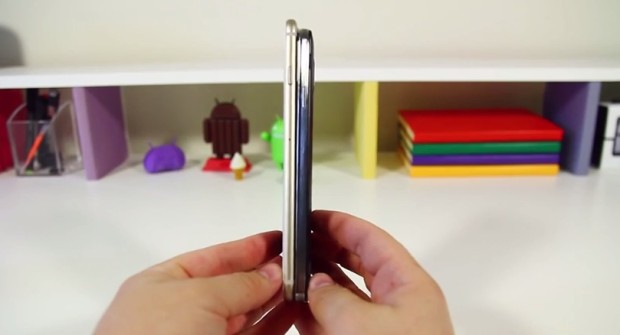 The large iPhone 6 may be taller than the Galaxy Note 3, based on this leak. Image via TechSmartt.

The Galaxy Note 3 is still wider than the largest iPhone 6, based on this comparison. The 5.5-inch iPhone 6 price may be $100 more than the base iPhone 6, similar to the higher price Samsung charges for the Galaxy Note 3. Although this is a comparison many buyers will make, Samsung is working on a new Galaxy note for 2014.

We expect to see the Samsung Galaxy Note 4 release this fall, around the time Apple delivers the iPhone 6 with a 5.5-inch display. The Galaxy Note 4 may arrive with a 5.7-inch QHD display that offers a beautiful place to look at photos and videos, a 16MP camera and faster processor.

LG is not as popular as Samsung and Apple, but the LG G3 is an impressive device that packs a 5.5-inch QHD display into a size that is about like the Galaxy S5, and that is smaller than a 5.5-inch iPhone 6 mock-up. 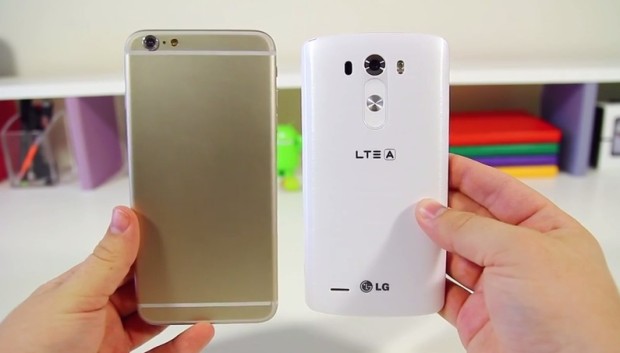 The 5.5-inch iPhone 6 vs LG G3 shows a larger ipHone, even though both devices are designed for a 5.5-inch display. Image via Techsmartt.

The LG G3 is able to offer a smaller device by putting some buttons on the back of the device and using very slim bezels throughout the device. The QHD display looks great for showing photos and video, and even though Android and Android apps are still in need of an overhaul for the new higher resolution display found in the LG G3, it is still stunning to look at. LG also upgrades the camera on the G3 with a new laser focus that helps it take photos that are in focus quicker.

Apple is reportedly shifting to a larger megapixel size, but the same 8MP sensor, which can help capture images better in low light. We don’t know if Apple plans to use similar tech for faster focusing on the iPhone 6.