After months of rumors and speculation last week LG took the stage in New York City and officially announced the all-new redesigned and leather-clad LG G4. The new phone is a premium flagship device loaded with more features than most will ever need, and below we’ll be going over a few steps to help new owners get started.

Equipped with a big 5.5-inch Quad-HD display and an excellent new 16 megapixel front facing camera, the G4 has a lot to offer. And while it isn’t available yet, once it starts hitting carriers later this month and in early June owners will have a lot of questions. Not to mention LG and T-Mobile’s giveaway letting users get one early, and for free.

Right out of the box the LG G4 is fast, fluid, and works wonderfully but there are always a few steps you’ll want to take. In just 10 or so minutes, this guide will get your new smartphone prepared for the future with better security, backup options, improved battery life, and much much more.

LG’s latest G4 is already running Google’s latest Android 5.1 Lollipop software release, but is covered in a completely redesigned and much improved interface from LG, called their UX 4.0. Similar to Samsung’s TouchWiz interface or HTC Sense, the LG UI delivers improvements to Android without making things more difficult, cluttered, or slowing your device down. It’s all about simplicity, and so far we like what they have done with Lollipop.

Once you get the G4 you’ll want to try out that impressive 16 megapixel camera or buttons on the back, not to mention watch some videos on the big HD display, but you’ll want to also take notice of the steps below to ensure your phone will be running great for years to come, or be protected in case of loss or theft.

An option that’s been available on Android smartphones for years that many users don’t employ, is a passcode or pattern on the lockscreen. With smartphones having so much information, banking accounts, and email access these days, security is extremely important and your device needs to be secured.

If you just got the LG G4 and are going through the initial setup, it will let you use their version called KnockCODE. Which lets you tap any four areas of the display as a secret, hidden pin. This works quiet well, but the usual pin and pattern security options on Android are also available for those who’d like. It takes about 30 seconds to set up a password or pattern lock, and your device will be protected from prying eyes or in case of loss and theft.

Read: How to Take a Screenshot on the LG G4

The LG G4 offers KnockCODE out of the box during setup, otherwise head into settings and do it yourself. Pull down the notification bar and go to settings > lockscreen > and select screen lock. From here simply choose your method of choice. We use KnockCODE 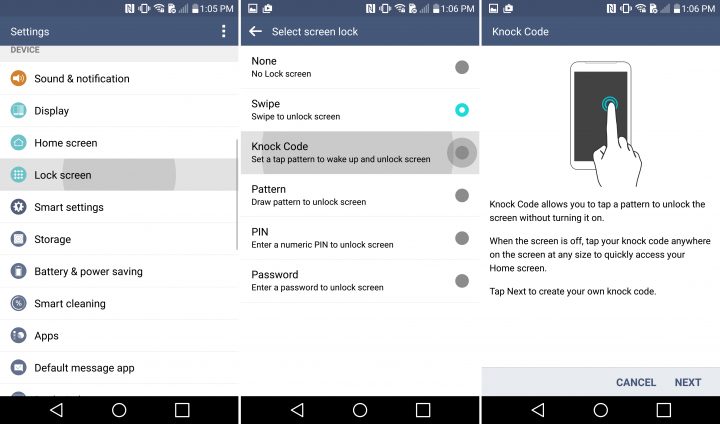 We recommend users enable at least one layer of security, as you never know where your smartphone could end up if lost or stolen. You wouldn’t want precious data or pictures getting into the wrong hands. There’s no fingerprint scanner for security like the Galaxy S6, but the options available should suffice.

While we won’t get into transferring from an old device to your new LG G4, we will explain a few simple steps you’ll want to take to keep your new phone backed up and ready to go. Google’s backup options will be brought up during setup, which we’d recommend most users agree to, but you can always control more backup & sync options in settings later. 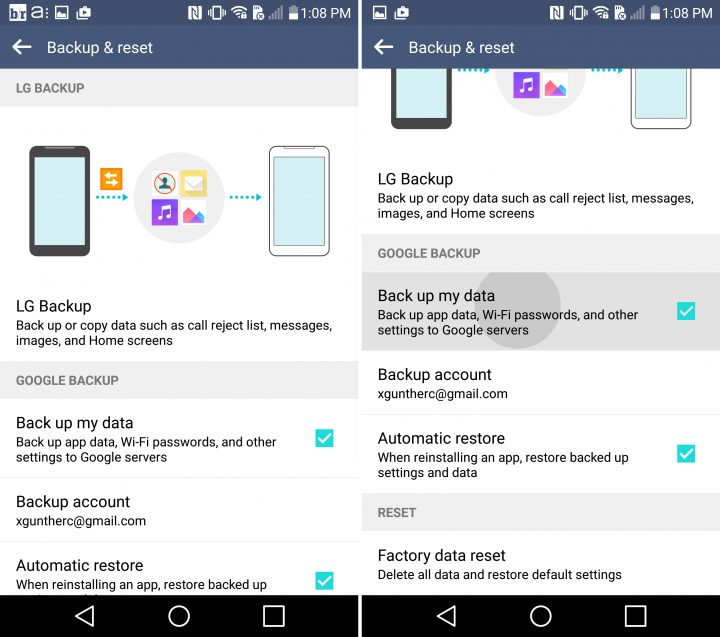 Settings > Backup & reset > Back up my data

Using the same steps as mentioned above you’ll want to head into settings and scroll down to backup & reset. Here is where you can turn on/off Google’s backup solution. It isn’t an all-in-one solution, but will backup (and restore on a new device) your WiFi passwords, app data (and game saves) wallpapers, and other settings. This is extremely convenient. There’s also a new LG Backup option that will let you copy data, call reject lists, text messages, images, and even your home screen. An easy way to switch to a new phone if needed.

Users can also check or uncheck the restore option where Google will automatically restore any available settings or data from an app being reinstalled. This will restore your information if you lose your G4 and have to get a new one, or restore any previously backed up data from your prior smartphone to a new device.

Google offers a pretty good Device Manager and locator service of its own called the Android Device Manager. This is similar to FindMyiPhone, and works wonders. There’s almost no setup once you download the app from the Google Play Store, then just let Android’s device manager find your lost phone if you ever need to.

This is essential in case you ever lose your LG G4. You can access the ADM from another Android device, your tablet, or a PC to find a lost or stolen device, then track it down and recover that expensive smartphone. Even without it enabled, while logged into your Gmail account in Chrome just type “Find my Phone” in the Google search bar and it will find it’s nearest location. Pretty neat little trick that Google released earlier this year.

This is one of those small steps that many users overlook, but if you ever need it, you’ll be glad you took the 2-3 minutes to make sure it was ready to go.

Another thing many owners never do, but will save you money, is set mobile data limits. Whether you have a 2GB data plan with AT&T or Verizon, or are on a family plan with T-Mobile sharing data across multiple devices, it’s always smart to set limits. This way users can’t go over, and end up with a huge smartphone bill at the end of the month. We’ve all been there, and it’s extremely frustrating. 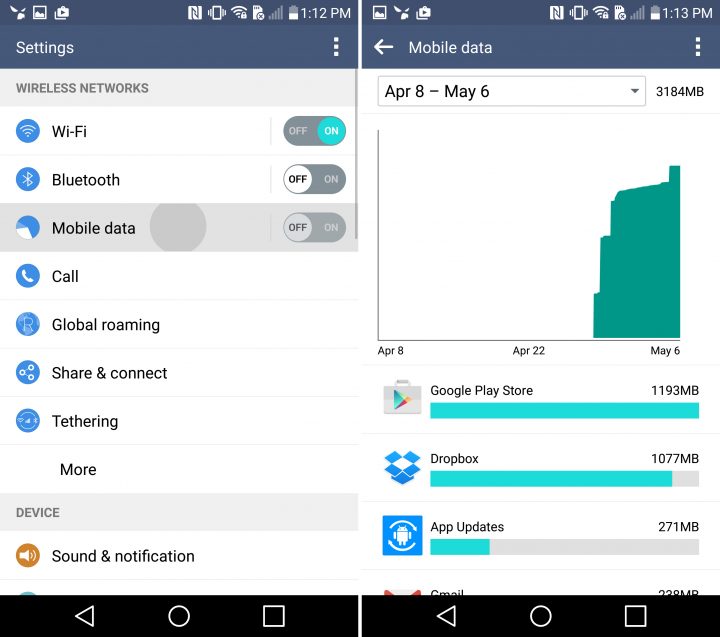 Here you can set an outright data limit, or also a warning to let you know you’re getting close, and to slow things down a bit.

This will ensure that once you reach your data limit (or even close) you’ll be notified not to keep streaming 1080p YouTube clips or watching WatchESPN, as you may incur charges. This would be a good time to switch to the WiFi at home to save data, and not get overage charges.

One of the biggest impacts to battery life besides the big 5.5-inch display and having too many apps syncing 24/7, is Google location services. Whether your phone is always tracking you location to deliver weather updates, or you use Google Now and Google Maps for directions or navigation, this is a big drain on battery life. In Android 4.4 KitKat Google added a new location option which allows for more control here, and the battery saving option is your best route. 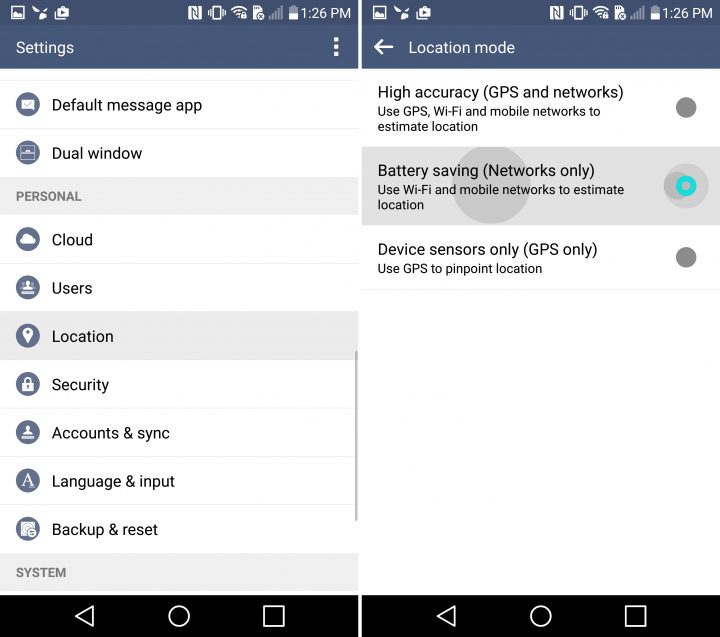 Battery saving mode turns off GPS, so turn by turn navigation may not be as accurate or need to be re-enabled, but for those who rarely use navigation, Battery saving mode is your best bet. This uses WiFi and your cellular network for location services, rather than the phone draining your battery with GPS turned on.

Users can also head into settings > display > and lower the brightness to 40% or so, rather than automatic, which can also improve battery life and extend the phone usage into the next day without a charge. It’s another good idea to see how often Facebook, Twitter, Gmail and other apps are syncing, and if too often, it’ll keep waking up your device and lower battery life. The LG G4 has a large 3,000 mAh battery under the hood, a more efficient 6-core processor, and a battery-friendly display, but there are always a few ways to get a couple more hours of usage out of any smartphone.

Of course you’ll want to sign into your Google account and get all your contacts, information, and apps, but there are tons of other options you may want to consider. Google Now is an excellent option worth enabling. As it gives you information you may need, before you ask, as well as driving directions, hands-free voice controls, and much more. Google Now can be activated by sliding up from the bottom of the display.

Smart Notice is another feature courtesy of LG. This tries to be similar to Google Now, and will popup below the weather widget with notifications. Reminders about missed calls, shortcuts to save unknown numbers to your contacts, or quick weather alerts. It’s pretty nifty, so make sure you check it out and keep it enabled.

Here we only go over a few important steps you’ll want to do when you first get the G4. After you’ve enjoyed it for a few days, are comfortable, head into settings and look through all the options, camera controls, remote control app and everything else this flagship phone has to offer.