Now that the impressive new LG G4 smartphone has been officially announced and unveiled, buyers are liking starting to weight all of their options and decide if they’re keeping what they have, seeking an upgrade, and finding what’s best for them. Here we’ll compare the new LG G4 to last years Galaxy S5 for those considering the upgrade.

The Samsung Galaxy S5 was one of the best smartphones released last year, and is still an excellent phone worth keeping a few more years. Users could be considering the Galaxy S6, or the new LG G4, and with that we’ll go over a few key areas that separate the two for potential buyers.

On Tuesday LG took the stage and finally announced the new G4 while focusing on three main areas. Those being an improved screen, the 16 megapixel camera, and some new genuine leather build materials. How does this compare to the Galaxy S5 and its plastic water-resistant design? Read on to find out.

The Galaxy S6 and HTC One M9 are both readily available and two excellent smartphones, but the LG G4 looks to be an excellent alternative. It has plenty to offer, and will need to compete with both of these devices while being released more than a month later than both of them. It’s a tough battle, but it may have just enough to compete.

While we’ve spent most of the past few months focusing on the S6 and HTC One M9, LG has quietly been lurking in the background building a rather impressive phone that should potentially steal some of Samsung’s sales, even if it arrives nearly two months later. Now that it is official, here’s how it compares.

When it comes to which smartphone is actually “better” between the Samsung Galaxy S5 or the LG G4 there are a lot of things that come into play. User preference, software or hardware needs, and of course the size of the device are all things each user will decide on. Not to mention one is a year newer than the other. While we don’t have all the answers, nor know what every user needs or wants, below are a five or so key features or differences that separate the two and may help consumers make the right choice.

Many consumers choose a smartphone based off of screen size. This is so true that even Apple increased the iPhone 6 last year to a much bigger size to compete with Android. This year LG kept the screen the same size as last year, but it’s still plenty big coming in at 5.5-inches, and bigger than the Galaxy S5.

The Samsung Galaxy S5 has a 5.1-inch 1920 x 1080p HD display. Until the Galaxy S6, it was the best screen on any phone I’ve used. That said, LG appears to beat it with the G4. Last year the G3 had a 2560 x 1440 Quad HD screen which was better on paper than the S5, but it was washed out, had poor viewing angles, and wasn’t the best. In 2015 the new G4 is way better than the G3, and arguably a lot better than the Galaxy S5. The colors may not be as accurate, but it looks great and has more screen real estate while barely being physically bigger.

According to an LG press release the new 5.5-inch Quad-HD display for the G4 achieved a “quantum jump” in color gamut and brightness. They’re calling it a “Quantum HD display”. The new LG G4 screen is brighter, feature extremely rich and stunning colors. All while being more efficient and easier on battery life. Not to mention be thinner, and deliver improved touch function and precision.

It has a new advanced In-Cell Touch technology that allows it to react to touches, even with water on it. Finally, it’s expected to show even more accurate colors over last year’s QHD panel in the G3 by offering a 120% color gamut, 50% increase in contrast, and 30% jump in brightness. It may not be as good as the Galaxy S6 from our initial hands-on and impressions, but its better and bigger than the Galaxy S5.

Samsung’s Galaxy S5 is slightly smaller, doesn’t have as high of a resolution display, and doesn’t feature the same slim bezels. If you want more screen, and a crisp image, the LG G4 should be a worthy upgrade for those who aren’t interested in the Galaxy S6 and its lack of a micro-SD slot or removable battery.

Samsung and LG are both in the same boat when it comes to design and materials used on smartphones. Both have been making plastic smartphones for years, ones that “look” like they’re aluminum but not. The ring around the Galaxy S5 is actually plastic, but looks like chrome, and the brushed aluminum design on the LG G3 is pretty but was still plastic. This year both went a different route. The Galaxy S6 is metal and glass, and the LG G4 while still plastic, will have genuine leather as an option. 6 different colors, to be precise.

In terms of design and build quality they’re pretty much on par, with Samsung maybe having a slight edge when it comes to overall durability and build quality. Mainly because the S5 is dust and water resistant with an IP67 rating. That said, the LG G4 looks better, and feels way better in the hand. The slight “arc design” curve to the entire device and genuine leather backs make it one of the most comfortable phones I’ve ever held in my hand. The regular ceramic infused plastic G4 though, feels rather cheap, and is very slippery. You’ll want to buy it with leather to enjoy it to the fullest. 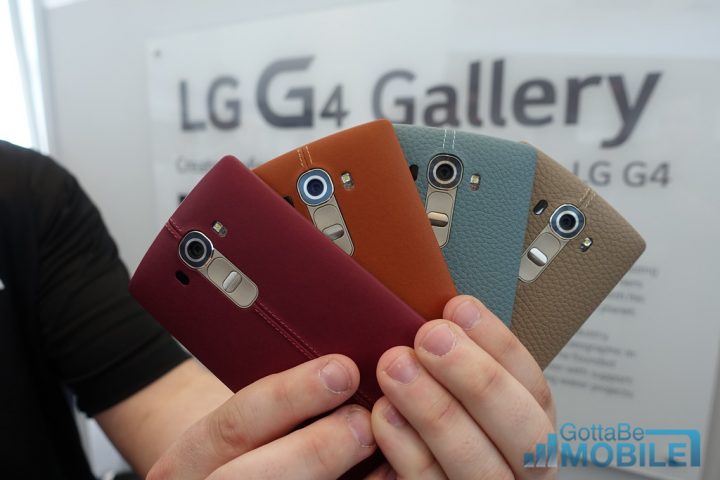 However, there’s a few major differences between both these phones. One being the LG G4 has all the buttons on the pack, and the second being Samsung’s Galaxy S5 is IP67 dust and water-resistant. Something LG can’t claim.

The Galaxy S5 can be dropped in water for hours and hours (they suggest only 30 minutes max) and come out working just fine. We’ve seen this from various tests online and from YouTube videos. It’s extremely durable and rugged, and while the LG G4 may handle wear and tear somewhat, the slim bezels around the large screen may not handle drops as easily as Samsung, and it certainly won’t survive water accidents like Samsung’s Galaxy S5. LG claims the arc design helps protect the screen, and the leather feels more hard and durable than the Moto X leather, so should handle wear and tear pretty good. We don’t have a leather version, so can’t say for sure until we’ve received a leather G4 and used it for a few months.

Overall the LG G4 is a better looking device in our opinion, and it just feels better in my hands. The Galaxy S5 design had a purpose though. Right down to the fingerprint scanner in the home button, and the water-resistant capabilities. The LG G4 is sleek, powerful, beautiful with the leather, and has an excellent camera which we’ll talk about below.

The Galaxy S5 had a very capable camera, but it isn’t as good as the Galaxy S6, and doesn’t stand a chance against the LG G4. New for the LG G4 is a 16 megapixel f1.8 camera lens with optical image stabilization and the same laser autofocus, and our initial impressions are extremely favorable. It could be better than the Galaxy S6, and will surely be a better camera experience than the S5, which was already pretty good.

Most phones are over 2.0 with the f-stop, which is the speed of the sensor and how well it captures details and light. LG has the fastest f1.8 lens in the G4. This week we used both the LG G4 and Galaxy S6 in average user “quick shots” with no tripod, no messing with settings, just pulling them out and snapping photos around NYC, and the link below is our comparison. The end results are surprising, and shows the G4 is extremely capable, and surely better than the Galaxy S5.

The G4 has a laser auto focus and this is the third year they’ve delivered optical image stabilization, while OIS was missing on the Galaxy S5. While Samsung’s aging device still has a very capable camera, but the G4 beats it in all categories, and should be one of the best camera smartphones in 2015.

As you can see from the breakdown above, these devices are extremely similar, but a few key areas are worth taking notice. If you upgrade to the G4 you’ll get a bigger display, a better camera, a 6-core processor, and a change at a fancy leather design if all US carriers offer the leather backs. You’ll lose the fingerprint scanner, and the IP67 dust and water resistant features that makes the S5 so durable. To each his own though.

We won’t talk about software much, as that is a personal preference. That said, the G4 has Android 5.1 Lollipop while the Galaxy S5 is still busy getting updates to Android 5.0.2 Lollipop, and will see 5.1 at a later date. Both have a manufacturer skin covering up everything too. Meaning this comes down to what you prefer, and a comparison won’t do much good until later.

So, last but certainly not least is the price. Sadly there’s no winner here either and you’ll have a tough choice to make. However, the Galaxy S5 is a year older and on sale from most carriers, especially now that the Galaxy S6 is here. You can find it for $99 on contract, $0.01 from Amazon, or even less. That said, this is more for those seeking an upgrade, not buying one or the other. Those buyers are likely eying the new Galaxy S6.

If you already own the Galaxy S5 it’s still a great phone, but spending $199 and signing a contract for the new G4 may be a good route. It has a lot to offer, a better camera, a bigger display, better battery life and a fancy new genuine leather design. Is it worth upgrading? That’s up to you to decide. The leather options could come with a $40-$50 premium, but carriers will be announcing pricing and leather options individually in the next 2-3 weeks. The LG G4 will be available from Verizon, AT&T, T-Mobile, Sprint, US Cellular and possibly smaller regional and prepaid carriers.

If you’re looking for a new phone right now, you’re probably trying to decide between the Galaxy S6 and the upcoming LG G4. That’s another discussion completely. However, if you have an LG G3, a Galaxy S4 or Galaxy S5, look to the LG G4 to be one of the best phones released this year, one that may be worth signing a contract for and ditching your old device. We’re loving it so far, especially the camera, so try one in stores once it becomes available in late May or early June.

Early rumors suggest a late-May release date but most likely the LG G4 won’t be available from US carriers until the first week of June. The moment we know more details on the LG G4 release date, we’ll be sure to update.