Now that the LG G4 has been officially announced and is coming soon, buyers are likely weight all of their options and trying to decide if it’s right for them, or if they should upgrade from the G2 to the G3 from last year, or the all new LG G4. Whether you’re looking for a new phone and trying to decide, or a current LG G3 owner, here’s how it compares to the latest flagship phone from LG.

Last year the LG G3 was an impressive smartphone that wowed many owners with its sleek bezels, fast camera, and huge 5.5-inch Quad-HD display in a small package. And this year LG is offering more of the same thing, only better, with the all-new LG G4. It’s slightly bigger but comes with a brand new look, an impressive camera and much more which we’ll go over below.

The Galaxy S6 and HTC One M9 are both readily available and two excellent smartphones, but the LG G4 is shaping up to be an excellent alternative. It will have to compete with both of these devices all while being released over a month later. Read on for more details about the LG G4, and how it compares to the model it will replace. 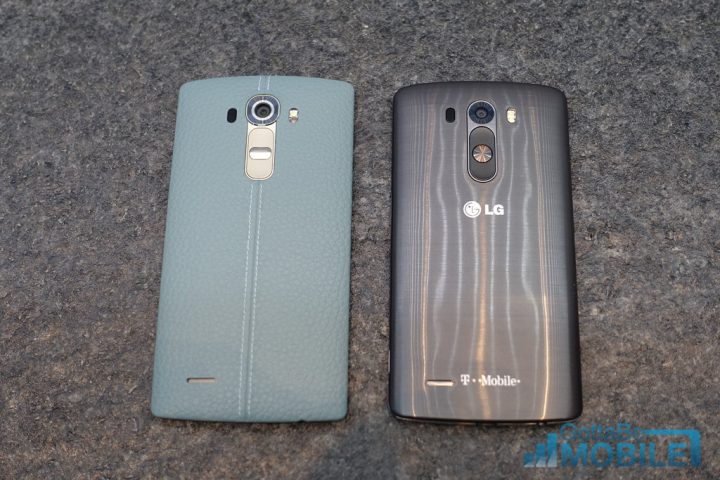 This year the LG G4 has been announced a month earlier than the G3 last year, and the G3 arrived a little quicker than the model before it as well. The company is slowly but surely getting quicker with releases, aiming at Samsung and HTC, and the newest LG G4 is the best smartphone from LG yet. It has a stunning camera, much improved screen, and is already running Android 5.1 Lollipop. It’s the best LG phone to date, and below we’ll go over why, while comparing it to the LG G3 from 2014.

When it comes to which smartphone is actually “better” between the G3 or the LG G4 there are a lot of things that come into play. That said, of course the newer option should be better. User preference is key, and since they’re both LG you know what you’re getting software wise. Not to mention one is a year newer than the other. While we don’t have all the answers, nor know what every user needs or wants, below are a five or so key features or differences that separate the two and may help consumers make the right choice.

Many consumers choose a smartphone based off of screen size, and price. However, here you have nearly the same device with the exact same screen size. That being said, the new LG G4 has much more to offer buyers over last years model, and the display is a key area of improvement.

Last year the G3 had a 2560 x 1440 Quad HD screen which was good on paper, but not in real life. It was washed out, had pretty bad viewing angles, got more washed out if you weren’t looking straight at it, and wasn’t the best in terms of colors. And while the new LG G4 may not be as good as the Galaxy S6 in viewing angles, everything else has been improved, and it’s drastically better than the G3.

According to an LG press release this new 5.5-inch Quad-HD display for the G4 achieved a “quantum jump” in color gamut and brightness. They’re calling it a “Quantum HD display”. The new LG G4 screen is be brighter, features extremely rich and stunning colors. It’s also more efficient and battery friendly, so they didn’t need to add a bigger battery to the phone, but we wish they did. Not to mention be thinner, and deliver improved touch function and precision.

It has a new advanced In-Cell Touch technology that allows it to react to touches, even with water on it. Finally, it’s expected to show even more accurate colors over last year’s QHD panel in the G3 by offering a 120% color gamut, 50% increase in contrast, and 30% jump in brightness. In practice they’ve done exactly that. Colors are more vibrant and rich, blacks are inky black, and the brightness while better, still could use some improvement. That said, the G4 has a great display, even if the colors are a bit on the cold side with blue hues to white screens.

These two phones look somewhat the same as LG didn’t change the design too much, but the LG G4 is significantly bigger for some odd reason while having the same screen and battery size. That said, the design received some welcomed changes which we’ll mention in our next category.

Last year the LG G3 continued its signature design with buttons on the back, and we get that same look here in 2015. The device was made entirely of plastic, but had a brushed aluminum look to the plastic housing. With the G4 LG changed the plastic backs to a new diamond-etched and ceramic infused plastic coming in the same three colors. White, silver (titanium) and gold, but introduced a new genuine leather hand made back in six colors, and they’re simply stunning.

In terms of design and build quality they’re pretty much on par, with the G4 potentially being a little better. The plastic versions still feel nearly the same, but the G4 corners aren’t as rounded, and not as comfortable. That said, everything else about the design is better. The leather back options in six colors feel great in the hand, and the new slightly curved “arc” design to the G4 gives it a great in-hand feel. It’s comfortable to hold, and sitting face-down on a table the screen won’t get scratched as it’s slightly curved. It doesn’t bend like the G Flex 2, but it does have a curve to it. It’s barely noticeable.

If you opt for a plastic LG G4 you’ll want a case, as the new ceramic infused plastic housing is extremely slippery, and I’ve dropped mine twice already. LG re-enforced the display to protect it from drops, and so far I’ve yet to see any damage from my two drops, so the design is proving to be durable, while better, and luxurious if you get a leather-clad G4.

This year the new LG G4 will feature the same 5.5-inch screen, slim bezels, buttons on the back, laser auto focus and more. They will look nearly the same at first glance, even though they’re very different. You’ll notice four of the six new leather designs above, one of a few things that will distinguish these two devices from one another.

If you loved the LG G3, the G4 should offer more of the same only better in every single aspect. Which brings us to our next points, the camera and specs sheet.

The LG G3 had a very capable camera, but it isn’t as good as the Galaxy S6, and will certainly be beat by the new G4. In fact, the G4 could have the best camera we’ve used on a smartphone to date. The 13 megapixel camera was pretty good with the G3, but didn’t do great in low light or on fast moving objects, even with the laser auto-focus. However, LG claims to have one-upped Samsung, and its 16 megapixel camera has an even faster f1.8 shutter than the new Galaxy S6. Our initial impressions are extremely favorable, and you can see samples in our comparison linked to below.

Most phones are over 2.0 with the f-stop, which is the speed of the sensor and how well it captures details and light. LG has the fastest f1.8 lens in the G4. Add that to a 3rd generation optical image stabilization and the laser auto-focus, and this is one of the most capable smartphone cameras released in 2015, and very promising. If you want to take great photos with your phone, the LG G4 should be at the top of your list.

The G4 we have is still running pre-production software, and we’re hearing the camera will be even better once the phone is officially released to the public. That’s an impressive thing to say, considering it’s already giving the Galaxy S6 a run for its money.

While specs aren’t as important as having a device that’s fast, fluid, and will work for years to come, it’s still something many consider while making a purchase. Below are the hard numbers for those interested, but it all boils down to these devices being nearly the same under the hood with a few small changes, and software will play the biggest role in how each device performs. A key thing to notice is the G4 already runs Android 5.1 Lollipop, while the G3 just got updated to the older Android 5.0.2 Lollipop last month.

As you can see from the breakdown above, these devices are extremely similar, but a few key areas are worth taking notice. Essentially buyers main concerns should be the newer and much improved camera, the more powerful 6-core processor under the hood, Android 5.1 Lollipop out of the box and of course the six new leather color variants. This year we haven’t received a straight answer from LG regarding wireless charging, but they do say some will have it, and replacement backs and flip cover cases will be available that will add wireless charging to the G4.

The new LG G4 should be faster, last longer, and just be an overall excellent device aimed at taking on the iPhone 6, Galaxy S6, HTC One M9 and more.

We won’t talk about software much, as they are essentially the same here. The G4 does run Android 5.1 Lollipop and has some new features that won’t come to the G3 in updates, but expect the same new LG UI to arrive on the G3 soon, making these devices rather similar overall. LG just updated the G3 to Android 5.0.2 Lollipop, so we’re not sure when it will see Android 5.1 or Android 5.1.1 Lollipop upgrades.

So, last but certainly not least is the price. With the LG G4 being a year newer, it will come with what’s likely a $199 price tag with a new 2-year contract. That means the G3 will see heavy discounts to its already $99 price tag, and sometimes even less. Of course this post is more geared towards those looking to upgrade, not buy one vs the other, but that’s still worth mentioning.

If you already own the G3 it’s still a great phone, but spending $199 and signing a contract for the new G4 may be a good route. It has a lot to offer, a better camera, better battery life (hopefully) and a fancy new genuine leather design. Is it worth upgrading? That’s up to you to decide. The G3 will be good for years to come, but that leather and new camera sure are enticing.

The G4 is coming to all major carriers in the US, but none have announced pricing or availability at this time.

We’ve been testing the G4 over the past few days, and will have a full review soon enough. Early rumors suggest a late-May release date, but it’s looking more like an early June arrival. We’ll be on the lookout for a release date, and update the moment we know more.