Now that the LG G4 has been officially announced and is coming soon, buyers are likely weight all of their options and trying to decide if it’s right for them, or if they should upgrade from their current device to the all new LG G4. Whether you’re looking for a new phone and trying to decide, or a current Nexus 6 owner wanting something smaller, here’s how the two compare.

In October Google announced the new Nexus 6 running Android 5.0 Lollipop. It’s a large 5.96-inch smartphone with sleek bezels to keep the overall size down. That said, it’s still very large. If you’ve been considering the Nexus 6, looking at LG’s G4 may be a good option. It has a big screen in a smaller package, a better camera and more.

The Galaxy S6 or Nexus 6 are both readily available and two excellent smartphones, but the LG G4 is shaping up to be an excellent alternative. It will have to compete with both of these devices all while being released months later than the competition. Read on for more details about the LG G4, and how it compares to the Nexus 6 for those considering the two, or want to ditch Google’s whale of a phone. 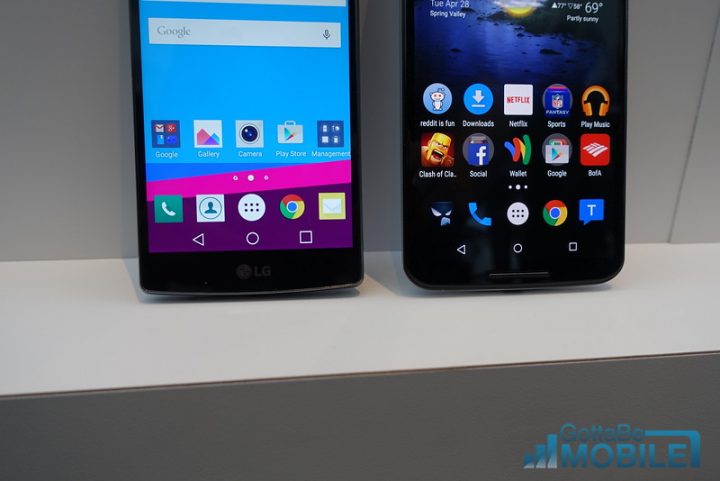 This year the LG G4 has been announced a month earlier than the G3 last year, and the G3 arrived a little quicker than the model before it as well. The company is slowly but surely getting quicker with releases, aiming at Samsung and HTC, and the newest LG G4 is the best smartphone from LG yet. It has a stunning camera, much improved screen, and is already running Android 5.1 Lollipop. It’s the best LG phone to date, and below we’ll go over why, while comparing it to Google’s Nexus 6.

When it comes to which smartphone is actually “better” between the Nexus 6 or the LG G4 there are a lot of things that come into play. That said, of course the newer option should be better. User preference is key, and software preferences are a big part of a purchase too. While we don’t have all the answers, nor know what every user needs or wants, below are a five or so key features or differences that separate the two and may help consumers make the right choice.

Many consumers choose a smartphone based off of screen size, and price. This is a tough choice here as both are big devices, but the Nexus 6 is certainly much bigger. Thanks to slim bezels on the G4 you get nearly the same size screen, but a smaller overall device that’s much easier to hold and use.

Google’s Nexus 6 has a large 5.96-inch (lets just call it six) Quad-HD display with a 2560 x 1440 resolution, and it looks wonderful. It’s extremely bright, has great viewing angles, and pretty good color reproduction too. It’s worth noting it has a rather warm look to colors, and whites, while the G4 has a very cold look with blue hues to whites. Both however, are excellent screens. 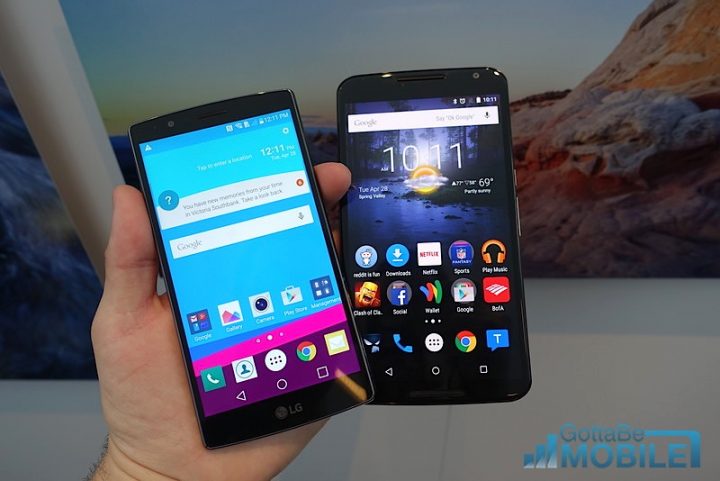 According to an LG press release this new 5.5-inch Quad-HD display for the G4 achieved a “quantum jump” in color gamut and brightness. They’re calling it a “Quantum HD display”. The new LG G4 screen is brighter, features extremely rich and stunning colors. It’s also more efficient and battery friendly, so they didn’t need to add a bigger battery to the phone, but we wish they did. Not to mention be thinner, and deliver improved touch function and precision.

It has a new advanced In-Cell Touch technology that allows it to react to touches, even with water on it. Finally, it’s expected to show even more accurate colors over last year’s QHD panel in the G3 by offering a 120% color gamut, 50% increase in contrast, and 30% jump in brightness. In practice they’ve done exactly that. Colors are more vibrant and rich, blacks are inky black, and the brightness while better, still could use some improvement. That said, the G4 has a great display, even if the colors are a bit on the cold side. Personally I prefer the colors and overall looks of the Nexus 6 display, but it may be too big for some.

The Nexus 6 is the first Nexus smartphone in a long time available from all carriers in the United States. So we’d advise you head into a nearby carrier store and try it out, or Best Buy, to see if you can even handle the large 6-inch screen and barely pocketable size.

The Nexus 6 is Google’s first Nexus smartphone that’s truly a premium device. It has top-tier specs, an aluminum ring around the frame, and is overall a well-rounded device. The design is nice, but it’s also quite large. With the G4 LG changed the plastic backs they always use to a new diamond-etched and ceramic infused plastic coming in the usual three colors. White, silver (titanium) and gold, but introduced a new genuine leather hand made back in six colors, and they’re simply stunning.

In terms of design and build quality they’re pretty much on par, with the Nexus 6 probably being better made, although we’re loving the G4 leather. The plastic versions still feel nearly the same, but the G4 corners aren’t as rounded, and not as comfortable. That said, everything else about the design is better. The leather back options in six colors feel great in the hand, and the new slightly curved “arc” design to the G4 gives it a great in-hand feel. It’s comfortable to hold, and sitting face-down on a table the screen won’t get scratched as it’s slightly curved. It doesn’t bend like the G Flex 2, but it does have a curve to it. It’s barely noticeable. 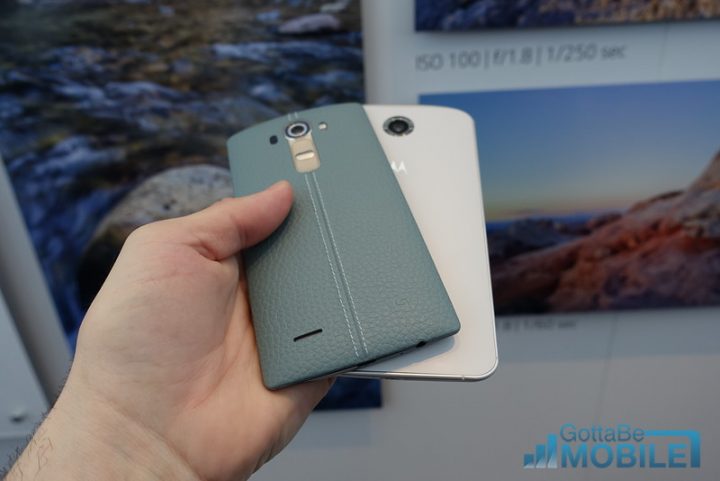 If you opt for a plastic LG G4 you’ll want a case, as the new ceramic infused plastic housing is extremely slippery, and I’ve dropped mine twice already. LG re-enforced the display to protect it from drops, and so far I’ve yet to see any damage from my two drops, so the design is proving to be durable, while better, and luxurious if you get a leather-clad G4.

LG has been known for the slim bezels around their screens, but Motorola and Google has them beat with the Nexus 6. It’s bezels are smaller than LG’s, while adding dual front facing speakers at the same time. If you want stunning sound, the Nexus 6 delivers. LG’s G4 has an improved and very loud rear speaker, but it’s facing the wrong way like so many phones these days.

If the LG G4 has slightly rounded edges and dual front facing speakers, it would be the perfect device. Those two things aside, everything about it is more enjoyable than the Nexus 6, and that includes trying to use it with one hand. The Nexus 6 is big.

The Nexus 6 has one of the best cameras of any Nexus device, but that isn’t saying much. The 13 megapixel OIS camera is ok, but it isn’t as good as the Galaxy S6, and will certainly be beat by the new G4. In fact, the G4 could have the best camera we’ve used on a smartphone to date. LG claims to have one-upped Samsung and everyone else, and its 16 megapixel camera has an even faster f1.8 shutter than the new Galaxy S6. Our initial impressions are extremely favorable, and you can see samples in our comparison linked to below. 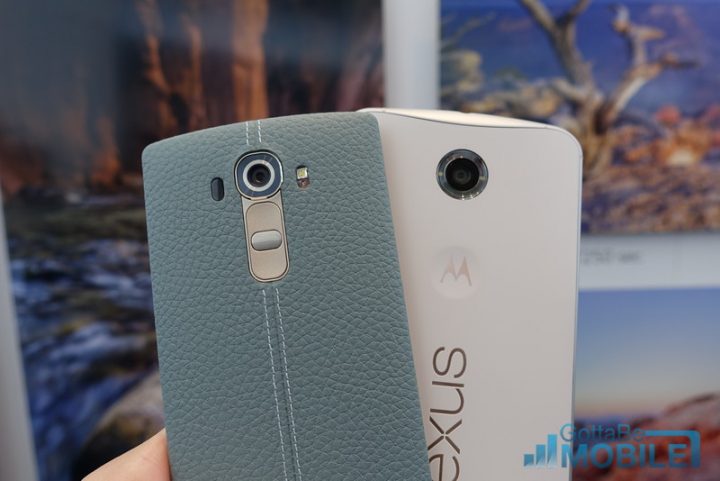 Most phones are over 2.0 with the f-stop, which is the speed of the sensor and how well it captures details and light. LG has the fastest f1.8 lens in the G4. Add that to a 3rd generation optical image stabilization and the laser auto-focus, and this is one of the most capable smartphone cameras released in 2015, and very promising. If you want to take great photos with your phone, the LG G4 should be at the top of your list.

The Nexus 6 does a pretty good job for your average photos for social sharing, but the stock Google camera app is lacking in features, and the auto focus isn’t all that fast either. If you want fast focus, best in class image stabilization, and good photos in low light situations, the G4 will certainly deliver better images than Google’s device.

Oh, and the front facing camera on the LG G4 is 8 megapixels, compared to 2.1 with the Nexus 6. If you take selfies, there’s no comparison here.

While specs aren’t as important as having a device that’s fast, fluid, and will work for years to come, it’s still something many consider while making a purchase. Below are the hard numbers for those interested, but it all boils down to these devices being nearly the same under the hood with a few small changes, and software will play the biggest role in how each device performs. A key thing to notice is the G4 already runs Android 5.1 Lollipop, just like the Nexus 6, but in the future the Nexus 6 will get updates first, by at least a few months.

As you can see from the breakdown above, these devices are extremely similar, but a few key areas are worth taking notice. Essentially buyers main concerns should be the bigger (or smaller) screen, way better camera, the more powerful 6-core processor under the hood, and of course the six new leather color variants. This year we haven’t received a straight answer from LG regarding wireless charging, but they do say some will have it, and replacement backs and flip cover cases will be available that will add wireless charging to the G4. 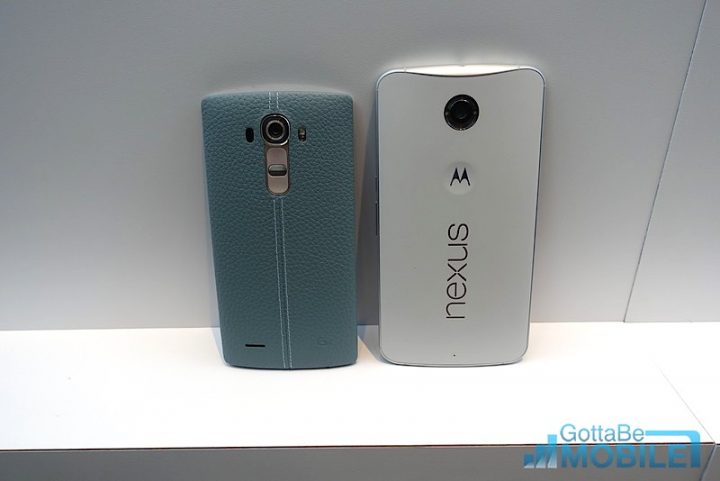 Google’s Nexus 6 has a bigger battery and built-in wireless charging, and front facing speakers, but everything else is better about the LG G4. It also has a micro-SD card slot, something Nexus users wish they had so they could add more storage whenever they’d like.

We won’t talk about software much, as they both have Android 5.1 Lollipop. The G4 runs the latest version of Android, but LG’s UI completely changes the look of stock Android. I prefer stock Android, but the G4 has a pretty slick interface that performs great. That said, lets talk about the price.

So, last but certainly not least is the price. With the LG G4 being a bit newer, it will come with what’s likely a $199 price tag with a new 2-year contract. That will beat the $249 price of the Nexus 6, and it’ll surely cost less than the $649 and $699 outright pricing.

Google’s Nexus 6 comes in 32GB from carriers, but you can also get it with 64GB from the Google Store for $699. It’s a heavy price to pay especially when you can get a 32GB LG G4 and toss a 128GB micro-SD card inside for tons of space.

The G4 is coming to all major carriers in the US, but none have announced pricing or availability at this time.

If you’re looking for a new phone right now, you’re probably trying to decide between the Galaxy S6 and the upcoming LG G4. That’s another discussion completely. However, the Nexus 6 is also a good option as it has a large screen and the latest version of Android, similar to the LG G4.

We’ve been testing the G4 over the past few days, and will have a full review soon enough. Early rumors suggest a late-May release date, but it’s looking more like an early June arrival. We’ll be on the lookout for a release date, and update the moment we know more.