After seeing some leaks and reports on a new smartphone from LG to rival Samsung’s popular Galaxy Note 3, this week they’ve officially announced exactly that, and it’s called the LG Gx.

LG’s latest device comes in quite large, phablet large, delivering a huge 5.5-inch display to take on Samsung’s array of devices. Offering a smartphone extremely similar to the LG G2, this smartphone is aimed at the Galaxy Note lineup. LG released a 5.5-inch Optimus G Pro earlier this year with pretty impressive specs and hardware, and this newly announced phone is almost the same, just improved in all the key areas. 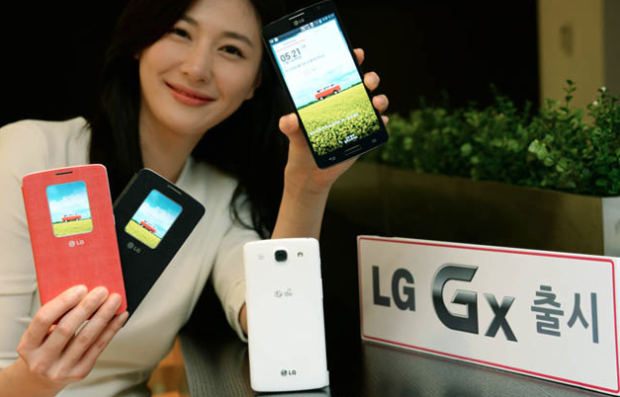 This is the latest powerhouse smartphone from LG, but even with all the improvements it may not directly compete with the Galaxy Note 3. The Optimus G Pro outpaced the Note 2 from last year in most categories, but LG’s late to the game this year and the Note 3 is already extremely popular, selling by the millions.

Confirmed this week the LG Gx offers a 5.5-inch 1920 x 1080p full HD display, and a 1.9 GHz quad-core Snapdragon 600 processor with 2GB of RAM and 32GB of internal storage. Packed with a 13 megapixel rear camera, 2.1 MP shooter on the front for video chatting, and a large 3,140 mAh battery it has everything needed to compete with Samsung and the HTC One Max.

The LG Gx being released this late in the year is pretty odd, especially considering this is bigger than the flagship LG G2. With CES coming early next month and Mobile World Congress following that, we expected LG to hold off on any announcements until the new year. The device is late to the market, and will probably be replaced with a more powerful device with the new Snapdragon 800 or 805 next year, so it really makes no sense.

This is the answer to the Galaxy Note 3 in Korea, even though the Galaxy Note 3 has a better Snapdragon 800 processor with 3GB of RAM, and even a bigger battery. LG wants to take on Sammy in its hometown, and this is how.

At the moment we’re not sure if this smartphone is the successor to the LG Optimus G Pro released this year, or if we’ll see an LG G Pro 2 sometime in 2014 to rival the Galaxy S5 or Samsung Galaxy Note 4. We’ll have to wait and see.