LG Display is showing off a concept for an unbreakable and flexible 5-inch OLED panel that could be employed in smartphones, like the company’s Optimus series, in the future. Unlike rival Samsung, which is using a different type of technology for its flexible OLED/AMOLED display and is facing delays, LG uses a different process and could beat Samsung to the market with his new display.

Samsung was rumored to introduce a flexible display on the forthcoming 6-inch Galaxy Note 3 tablet that will be introduced later this year, but the company confirmed that the flexible screen tech won’t be showing up in that product. 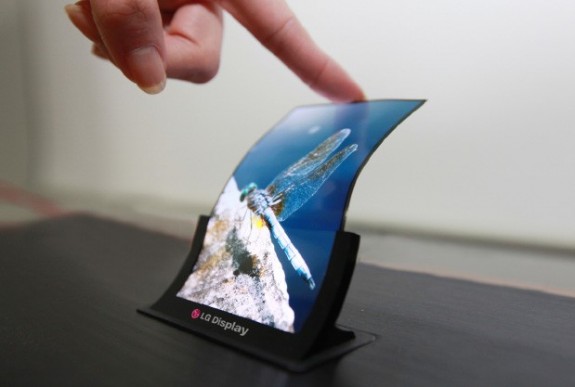 Not only would the display allow phones to have flexible or bendable screens, giving new form factors and applications to the smartphone designs we know of today, but the screen’s rugged capabilities will benefit consumers. One of the issues with screens today is that they can break or shatter upon impact, despite manufacturers using strengthened glass like Corning’s Gorilla Glass display. Employing LG Display’s plastic OLED panels may mean that consumers who accidentally drop their phones will no longer need costly display repairs or replacements.

Moreover, another benefit with the new screen is that it will have a mere 1.0 mm bezel. Apple already shrunk down the bezel on the iPad mini tablet and Samsung is doing the same on its 5-inch Galaxy S4 display. However, in the case of Apple, the company is also using intelligent software algorithms at the OS level to differentiate intentional screen taps versus unintentional taps when users are holding the iPad mini’s display near the bezel area. Android doesn’t offer this intelligence and it’s far easier to register accidental taps on the Galaxy S4 as a result of that device’s miniaturized bezels. Hopefully, whatever manufacturer that uses LG Display’s new panel will add this intelligence to make device’s more useful.

The new 5-inch flexible OLED panel was unveiled at the Society for Information Display’s show.

It’s unclear when the display will ship or when we can expect to see new phones, phablets. or devices with this new screen technology reach consumers. Given that the display was developed by LG, we’re anticipating that the Optimus smartphone from LG will be among the first to benefit from this work.

Additionally, according to a press release received by Engadget, the company also revealed a full HD display for 7-inch tablets that could lead to higher resolution displays. This will be beneficial as Apple is rumored to be releasing an iPad mini 2 with Retina Display resolution and Android tablets, which are capped at 1280 X 800-pixel resolutions today, will need to compete against Apple’s pixel-dense screens.