Following the early success of the biometric fingerprint reader on Apple’s iPhone 5s, it appears that Android rivals LG and HTC will continue to chase after Apple’s gold in the new year. Reportedly, both Android smartphone manufacturers may utilize a similar design on their rumored HTC One 2 and LG G3 flagships in 2014 with a sapphire glass cover over a fingerprint reader. 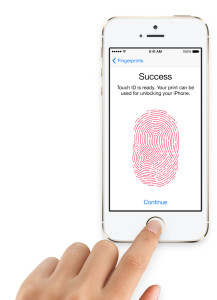 Given that DigiTimes is reporting that “HTC and LG Electronics will likely adopt sapphire home buttons in order to add fingerprint recognition in their next-generation flagship models,” it’s unclear if both manufacturers will switch to a design that resembles the iPhone 5s in that there will be a static home button on the front of the phone and where the biometric sensor doesn’t require a finger swipe to capture the fingerprint.

This information should be taken with a grain of salt as DigiTimes doesn’t have the best track record for pre-release intelligence. We’ll likely have to wait until Mobile World Congress as a potential unveil date for at least one of these two handsets to know more.

Current flagships from both manufacturers currently lack a physical home button. The HTC One uses capacitive touch buttons while the LG G2 employs Android navigation keys within the screen of the display so that the buttons aren’t visible when the screen is powered off.

Given the demand for sapphire in 2014, the publication is also speculating an increase in the material cost in the new year, with a rise up to 15 percent in the first quarter. It’s unclear if these costs will be absorbed or if they will be passed on to consumers in the form of higher phone prices.

If the costs are passed on, consumers will likely feel the increase more in 2014 than ever before in the U.S. given that the momentum has shifted away from subsidized $200 on-contract pricing for flagship phones to models where customers bring their own devices or pay full retail costs in exchange for no contracts and lower monthly plans. The movement was started by fourth largest carrier T-Mobile USA and will likely continue to expand to more carriers.

Apple may be better able to shy away in increased costs given the company’s recent strategic investment in sapphire production in a U.S. factory.