Verizon’s answer to the Samsung Galaxy Note 2 is finally official. Verizon will launch LG’s 5-inch smartphone, the LG Intuition, on September 6 for $199.99.

The LG Intuition, also known as the LG Optimus Vu, is the company’s first attempt at the “phablet market,” and it tries a few new ideas. Unlike most smartphones, the LG Intuition has a 4:3 aspect ratio like the iPad or an SD TV. Verizon says the aspect ratio makes the Intuition great for reading eBooks, browsing the web, watching video, and reviewing presentations. Some of those uses might be great on the phone, but some (like watching videos) don’t sound that great. 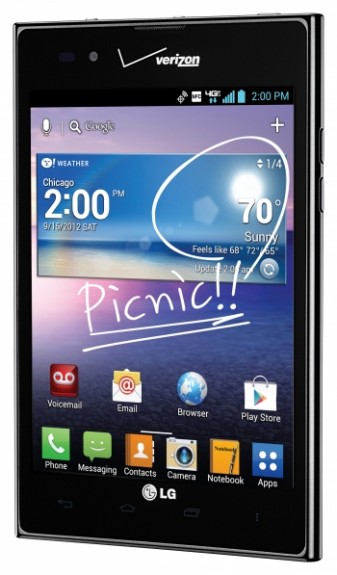 The Intuition uses a 1.5GHz dual-core processor, and runs Android 4.0 Ice Cream Sandwich. It also has an 8MP camera that can shoot 1080p video with a burst mode for photos. Other features include 1GB of RAM, a 1.9MP front-facing camera, and NFC.

The NFC radio works with LG’s Tag+ stickers which are programmable NFC stickers that can change settings on the phone. They’re just like Samsung’s TecTile stickers with a different name.

Like the Samsung Galaxy Note II the LG Intuition has its own stylus. Also like Samsung, LG can’t just call it a stylus, LG’s pen input is the “Rubberdium pen.” The pen should work well with the included Notebook app. Users can use the pen or their fingers to write or sketch in the note-taking app.

Also like the Galaxy Note II, the pen in the LG Intuition makes it easy to take notes on any screen with just one button.

The LG Intuition will beat the Samsung Galaxy Note II to the U.S. market, but the unique aspect ratio might turn off potential phablets users. Verizon still has the rumored HTC 5-inch phablet, however.