The LG Intuition is Verizon’s first large screen smartphone, offering up a 5-inch display that earns it a ‘phablet’ nickname.

Phablet is the name given to devices that fall in between smartphone and tablet size. The LG Intuition may soon be joined by the Samsung Galaxy Note 2 on Verizon, offering up a choice of 5-inch screen phones on Verizon 4G LTE.

The Intuition includes a stylus that controls on-screen actions, a button to take screen captures and memos as well as NFC stickers for triggering specific settings such as car mode with a tap. 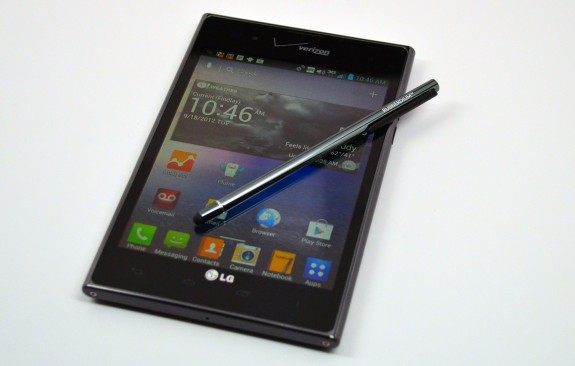 The LG Intuition is Verizon’s first big-screen smartphone with a stylus.

The LG Intuition is a tall, wide phone that can prove troublesome to hold on to with one hand, despite the thin design. The phone’s unwieldy shape comes thanks to the 4:3 aspect ratio of the 5-inch display. 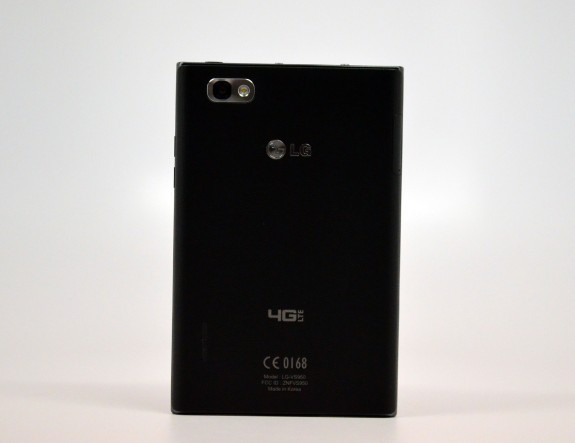 The back of the LG Intuition is textured, but doesn’t add grip.

While using the LG Intuition, I routinely relied on two hands to keep from dropping the device. The back of the phone is textured, but doesn’t add much grip to the device.

LG keeps the buttons and connections to the top of the device save a volume rocker on the right side. The top pf the Intuition sports a headphone jack, QuickMemo button, MicroUSB port with a cover and power button.

No place to store the stylus.

One of the biggest frustrations about the design of the LG Intuition is the lack of a place to keep the stylus. One of the biggest challenges in using the Intuition wasn’t hanging on to the phone, but not losing the small Rubberdium stylus that ships with the device.

LG should take a look at the Galaxy Note 2 and go back to the drawing board to find a way to include the silly named Rubberdium stylus.

The LG Intuition’s 5-inch display is not the widescreen aspect ratio found on the iPhone 5 and most smartphones, instead it is a 4:3 aspect ration. 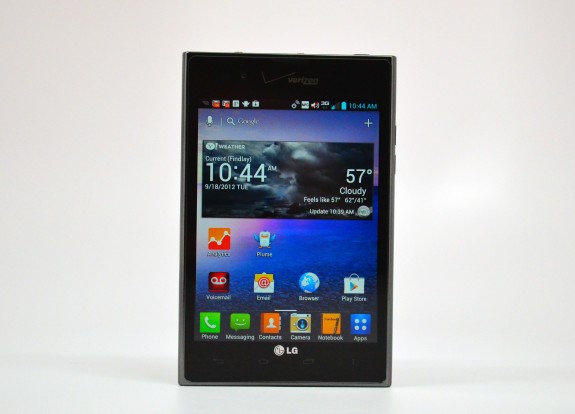 The display is great for reading books, delivering plenty of content on the page, almost like a paperback book, while staying more portable than the Nexus 7.

Unfortunately, the display means black bars on the screen, so instead of watching movies on the full 5-inch display users will need to settle with losing a good portion to black bars. The Galaxy Note 2 includes a widescreen format display, so users can use the full 5.55-inch display for watching videos. 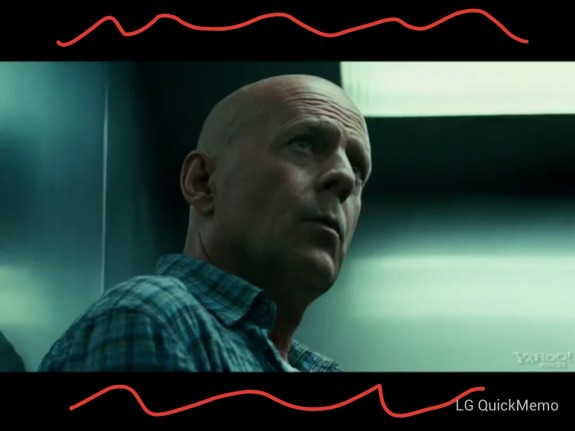 The display delivers decent colors, though colors drop out when viewed from an angle, so don’t plan on sharing a full movie with a friend.

The Intuition uses an odd resolution as part of this reading friendly aspect ratio, leaving some Android apps stranded in the middle of the display or stretched to accommodate the display. No matter which option I choose, the results aren’t pleasing.

Users that manage to hang on to the device with one hand can shift the keyboard to one side to make one-handed typing possible. 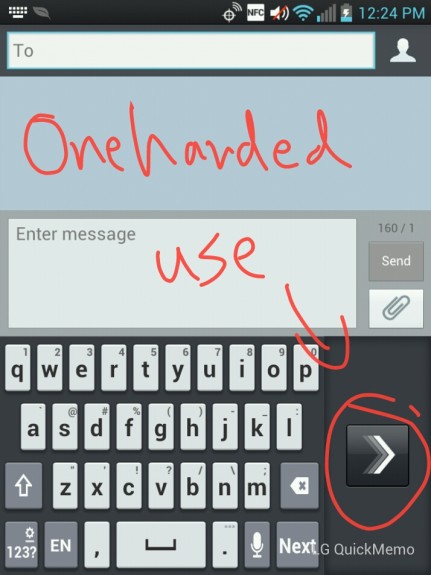 One handed keyboard mode slides to either side.

For apps that use the full display, typing in landscape mode with two thumbs is quite good thanks to the large, wide screen.

The LG Intuition packs a Snapdragon S4 processor and is able to handle pretty much any activity I threw at it, with a few sticking points.

Gaming and streaming video on the Intuition are enjoyable and fast, but the browser is a slow mess. Chrome for Android helps speed things up, but thanks to the odd screen shape it needs to stretch to fill the full screen. 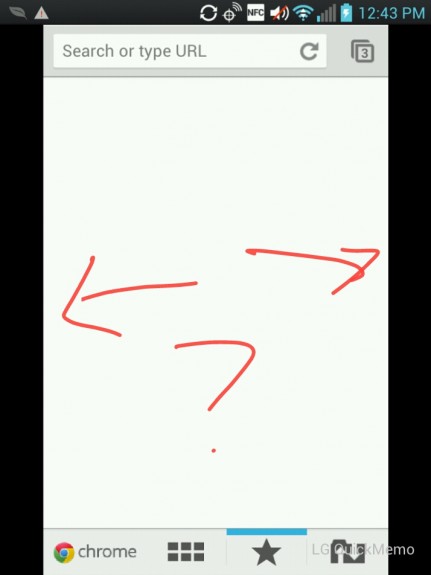 Chrome is faster, but scrunched or stretched.

There are places where Jelly Bean’s Project Butter would be helpful, such as switching between apps or opening the app drawer, which shows a “loading…” pop up too often.

4G LTE is fast on Verizon, and signal strength is good. The Intuition holds on to 4G LTE better than my Galaxy Nexus in poor coverage areas.

In spite of the large bright display and 4G LTE connectivity I’ve been able to last all day with a single charge with moderate use on the LG Intuition.

On several days with lots of reading outdoors or streaming video over 4G LTE the battery died before evening, but for the most part the Intuition can handle a full day of use. There is no user replaceable battery, so good battery life is even more important.

This large device is also a phone. While the phone isn’t the best in terms of call quality, we didn’t hear many complaints from callers during the past few weeks. Call quality on Motorola smartphones are much better, but users may not plan on making a lot of calls with the built-in microphone and speaker. I prefer to pair this large phone with a good Bluetooth headset to take and make calls easier. 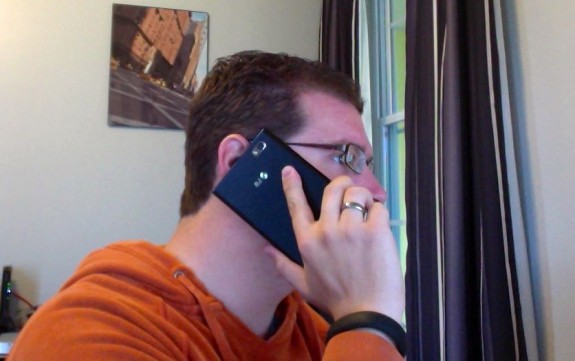 I prefer to use a Bluetooth headset, but the Intuition can act alone.

I recommend using headphones to listen to music or watch movies on the Intuition as the built-in speakers are not impressive or loud enough for my tastes.

The LG Intuition includes an 8MP rear facing camera capable of taking decent photos. When paired with good lighting, the Intuition is capable of taking photos worthy of sharing on Facebook. The camera is on par with most Android cameras, though it lacks the Best Shot and Burst Mode found on recent Samsung phones like the Galaxy S III. The low light performance is OK, but photos of kids or puppies will turn out blurry, like most cameras. 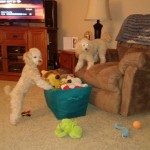 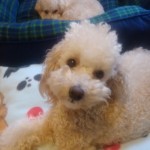 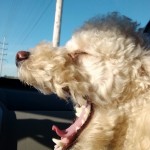 The camera also shoots 1080P HD video, and while i wouldn’t suggest using it to shoot the next independent film it is good enough for sharing clips with friends.

LG customized the core apps to suit the odd aspect ratio, but this leaves other apps like Netflix, Hulu Plus and others stretched or centered between black bars. Choosing between black bars and stretching is annoying, even though holding the home button down allows users to change aspect ratio inside the app. 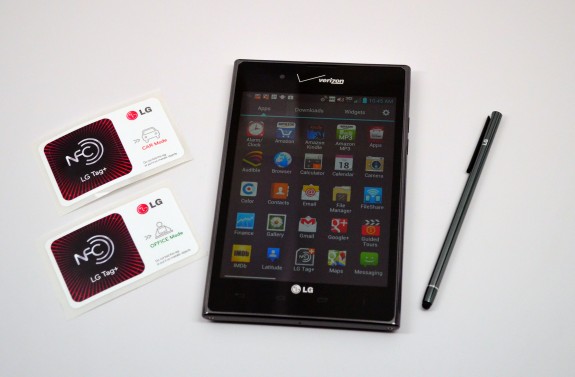 The LG Intuition uses NFC to change settings and includes a stylus.

The QuickMemo software is set up to make taking notes and capturing screenshots simple, pairing with the oddly named Rubberdium stylus. The stylus makes taking notes, annotating photos and interacting with the QuickMemo app easier, but it lacks the pressure sensitivity of the S Pen on the Galaxy Note 2.

I enjoy using QuickMemo to make notes and share quick bits of information but it was not a killer feature. Part of this is due to the lack of a place to keep the stylus  so times when I wanted to take a note or share a photo with a funny drawing, the stylus was at home or across the room. 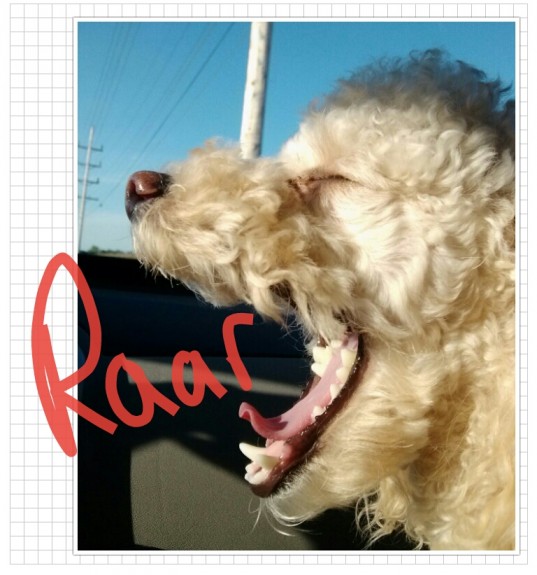 One use of the stylus and QuickMemo app.

There are a number of pre-installed Verizon apps on the phone as well as a suite of Amazon apps such as the Kindle app, Zappos app, Audible, IMDB and others.

Is the Intuition Worth It?

The LG Intuition is clearly a first generation phablet, coming to market weeks ahead of the Galaxy Note 2, a second generation device from the company that gave life to the modern phablet.

With the Galaxy Note 2 release date set for late October or early November, it’s tough to recommend the LG Intuition. 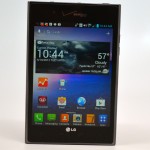 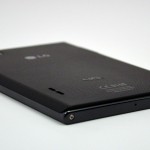 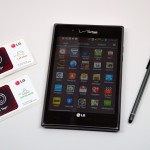 The LG Intuition uses NFC to change settings and includes a stylus. 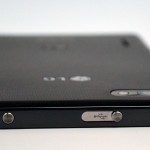 No place to store the stylus. 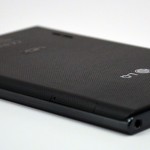 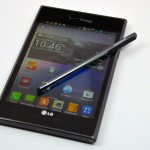 The LG Intuition is Verizon’s first big-screen smartphone with a stylus. 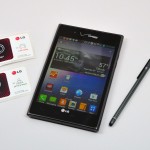 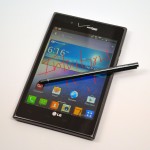 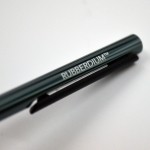