LG LCD Factory Strike Could Have Impact on Smartphones, Tablets

A strike at LG’s Nanjing, China LCD factory involving 8,000 workers may have potential impact on the mobile market, which is consuming higher resolution displays for tablets and smartphones. The company had failed to reach a resolution with its Chinese workers, who are demanding equal benefits to their counterparts in South Korea, including better pay and additional benefits.

The strike has been on-going since Monday. An image was captured with workers protesting around a fallen Christmas tree. 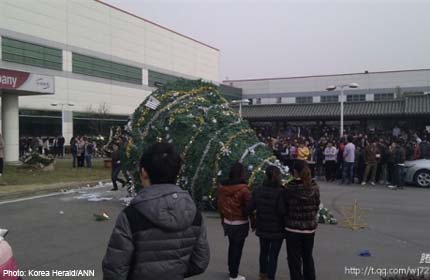 LG is the second largest producer of LCD displays in the world, and the strike could impact a variety of industries, including the consumer electronics sector for smartphones, HDTVs, tablets, computers, and notebooks among others. The company is trying to put on a positive spin by saying that it is altering manufacturing at other facilities and plants to make up for lost production in China.

LG is also rumored to be the supplier for Apple’s iPad 3 tablet, which is rumored to come with a higher resolution display than the original iPad and iPad 2, though at the same screen size. It’s unclear if the strike will have any impact on Apple’s decision in potentially selecting LG as a display provider. The Cupertino, California iPad-maker selects suppliers and vendors carefully to ensure that it has all the necessary components to meet the growing demands of its popular products.

Samsung, another LCD display supplier, may be another potential candidate for Apple’s iPad screens, but an ongoing legal battle between the two companies may strain relationships there.

LG also produces high resolution displays for handsets, including phones. As smartphones are getting better components and specs, a few HD-capable smartphones have made it into the marketplace with 720p HD resolution screens. One of them is the LG Nitro HD for AT&T’s network in the U.S.