LG Nexus 4 Connects to an HDTV and Charges with SlimPort

The LG Nexus 4 doesn’t include a Micro HDMI connection, but thanks to SlimPort HDMI and a $30 adapter, users can connect the Nexus 4 to any HDMI source without giving up on charging the phone.

Many smartphones, like the Droid RAZR HD, rely on a separate Micro HDMI connection, this allows Nexus 4 owners to connect to a HDTV through the single port.

While connected to a HDTV or projector, users can plug-in a Micro SUB cable to the adapter to charge the phone, something that is nice considering how quickly video drains battery life. 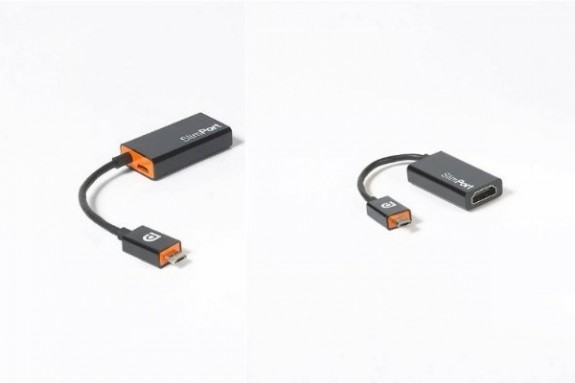 This SlimPort HDMI adapter connects the Nexus 4 to an HDTV.

For now the only SlimPort HDMI adapter available outputs HDMI, which is enough for many users. The Nexus 4 SlimPort HDMi adapter is available at Amazon for $30.

This is the Micro USB to HDMI adapter users have wanted for a long time, but it won’t work with just any Micro USB port. The device must support SlimPort HDMI. for now it is compatible with the Nexus 4, but we could see other manufacturers include it in 2013.

Soon, SlimPort will release a VGA adapter and a HDMI/VGA combo adapter that allows users to turn the Nexus 4 into an entertainment or presentation hub.There’s also talk of a Mi

With the SlimPort HDMI adapter, users can mirror the LG Nexus 4 display to a HDTV or projector at 1080P at 60 frames per second, more than good enough for watching Netflix, Hulu Plus or rentals from the Google Play store.

The video below shows the SlimPort HDMI adapter in action at CES 2012.

The LG Nexus 4 launched on Tuesday November 13th, and sold out quickly. The initial batch of Nexus 4 orders shipped, but Google is now sending Nexus 4 backorder notices, and new stock is not expected for a few weeks.