LG on the Fence Still With Intel Medfield Phones, Tablets

Phone- and tablet-maker LG is still undecided about the prospect of utilizing Intel’s mobile Medfield chipset on its smartphones and tablets. LG has previously been using ARM-based processors on its devices, and the switch to Intel’s Atom-based Medfield CPU is still up in the air right now despite the fact that LG was among the first out of the gate with a conceptual prototype of a Medfield smartphone several years ago that was coupled with Intel’s then Moblin OS, which has been transitioned to MeeGo and now to Tizen. 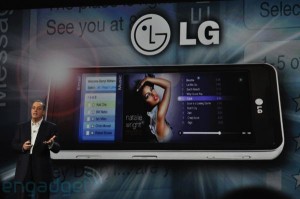 A few years ago at CES, LG had demonstrated the GW990, which had an ultra-wide display aspect ratio of 21:9, rather than the 16:9 common on many Android phones today. The company did not commercialize the GW990 and says that it was only a proof-of-concept device.

Prior to CES, there were speculations that LG would partner with Intel to debut some Medfield devices, but that did not materialize at this year’s show. Instead, Motorola had committed to a multi-year partnership with Intel and computer-maker Lenovo had shown off a few prototype phones at CES with Medfield processors.