LG’s new mid-range Optimus F5 could come to Verizon as the LG Lucid 2 sometime in the near future.

According to Unwired View, the LG Optimus F5 will come to Verizon as the successor to the LG Lucid from last year. Like the original Lucid, the Optimus F5 is a mid-range Android phone aimed at giving users who can’t afford a high-end smartphone access to 4G LTE.

LG first announced the Optimus F5 at Mobile World Congress last week. The phone has a 4.3-inch qHD (960 x 540) display and uses a 1.2GHz dual-core processor. The Optimus F5 runs Android 4.2 Jelly Bean with a custom LG skin and has 1GB of RAM, a 2150mAh battery, a 5MP rear-facing camera and a 1.3MP front-facing camera. 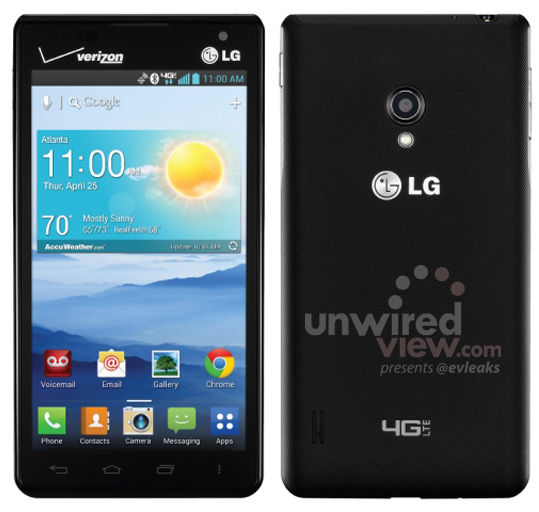 It’s not clear what changes Verizon will make to the Optimus F5. The leaked images show a few changes, most notable among them is the addition of an LED flash. The Optimus F5 LG showed at Mobile World Congress had no LED flash for the 5MP camera.

The leaked images also show the addition of the Verizon logo and a change in color from glossy white to a matte black.

If the image is true, the LG Lucid 2 will have four capacitive Android buttons even though the phone will run the latest version of Android. The capacitive buttons don’t take up any space on the relatively lower resolution screen (compared to recent high-end 1080p phones), the buttons also provide a menu button for apps that don’t yet incorporate it in their designs.

The LG Lucid 2 may come to Verizon sometime in the next month, though there’s no estimated date for the new phone. There’s also no mention of a price. The first LG Lucid came to Verizon for a price of $99.99 on a two-year contract, which seems like an average price for a mid-range smartphone such as this.