It looks like a variant of the LG Optimus LTE 2 Android smartphone has recently received WiFi certification. The phone appeared under the model number LG VS930 and it is believed to be bound for Verizon’s 4G LTE network in the U.S. The device will follow the high-end launches of the LG Revolution and LG Spectrum in recent years. Likely, Verizon will launch the device with its own branding rather than the Optimus LTE 2 moniker when the device hits the network. 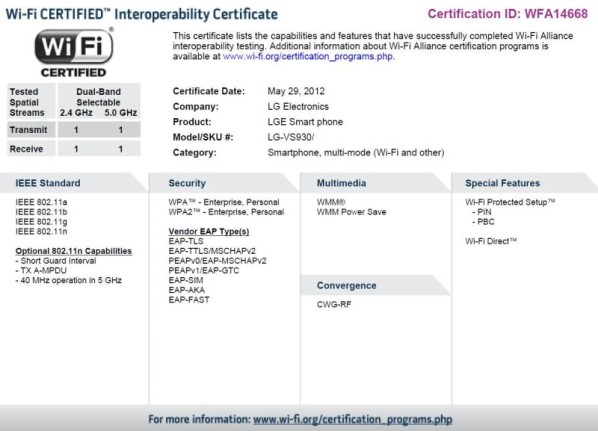 According to the WiFi Certification forum, the LG VS930 will feature WiFi bands a/b/g/n and can operate on both 2.4 and 5 GHz frequencies. The phone is expected to launch with a dual-core Qualcomm Snapdragon S4 applications processor clocked at 1.5 GHz as well as a 720p HD LCD display with a resolution of 1280 X 720 pixels.

Thus far, neither Verizon Wireless nor LG has announced pricing or availability for the smartphone, but being certified for WiFi use does make the device closer to launching.

In addition to the LG Optimus LTE 2, Verizon also has a number of handsets coming or rumored to come to its network in the near future. The U.S. LTE carrier announced the Droid Incredible 4G LTE at CTIA last month and it most recently announced that the Samsung Galaxy S III will be coming to its network but failed to give a release date. There’s also rumor of a Motorola-made Droid RAZR HD as well.