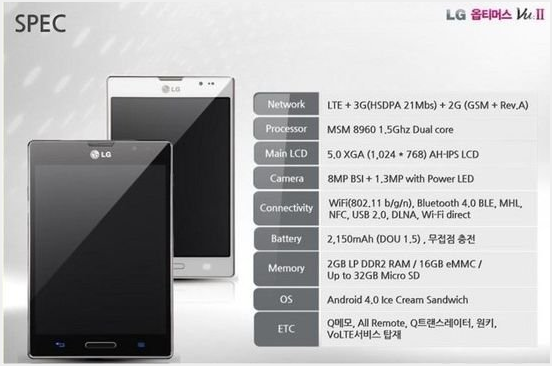 According to Phandroid, leaked specs reveal that LG will keep the same 5-inch display with a resolution of 1024 X 758-pixel, which gives the device a more ‘square’ form factor and makes the Optimus Vu II feel wider in the hands than the Note II’s 16:9 1280 X 720 resolution display. The Optimus Vu II will have the same display size and resolution as the original.

The processor will be a dual-core Qualcomm Snapdragon S4 processor that’s capable of supporting either a 4G LTE. The device will have 2 GB RAM, matching the RAM on Samsung’s device, along with NFC support, an 8-megapixel rear camera, and slightly larger battery.

Previously, the Optimus Vu II was also rumored to launch with a consumer-grade infrared port to allow the device to function as a touchscreen remote control for home entertainment systems and TVs.

The Vu II will launch with Android 4.0 Ice Cream Sandwich.

Thus far, LG has not announced the device and it’s unclear when the Vu II will launch. In the U.S., the original Vu was launched on Verizon Wireless’ 4G LTE network as the LG Intuition 4G.