LG Display a very pixel dense HD display with a 16:9 aspect ratio that’s great for consuming all your HD entertainment content on the go thanks to its 5-inch 1080p resolution. While the manufacturer did not specify which companies have ordered the display, we can fathom that the screen size and resolution would make this a perfect companion to your next phablet. LG Electronics already has its own phablet in the form of the LG Optimus Vu, a device that runs on Google’s Android operating system and has a high resolution 5-inch display with a less typical 4:3 aspect ratio that’s more conducive to reading e-books and digital magazines than for HD videos, and this new 5-inch screen can potentially show up on a future Optimus Vu generation. 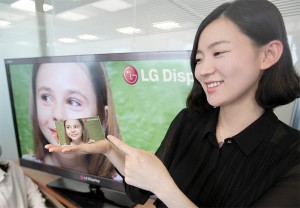 Engadget is reporting that the new 5-inch 1080p display uses Advanced High Performance In-Plane Switching technology for wide viewing angles and should be available later this year. The display has an effective 440 pixels per inch resolution, which is far greater than Apple’s 300+ PPI on the company’s 3.5-inch iPhone display.

With a 1080p HD display on a 5-inch screen, you’re essentially seeing pixel-for-pixel of what a full 1080p HD movie would look like on a mobile device.

South Korean rival Samsung was perhaps the first to popularize the phablet category with its 5-inch Galaxy Note and S-Pen interface. That device has a 5.3-inch display with a 1280 X 800-pixel resolution. Samsung uses its own HD Super AMOLED technology for its display on mobile devices rather than relying on LCD screen technology. Super AMOLED uses an underlying PenTile-based sub-pixel arrangement, so the common criticism for this type of display is that it isn’t as sharp as a comparable Super AMOLED Plus or LCD screen.

With faster mobile broadband technologies, advanced processors and graphics power, and longer battery life thanks to improvements in technology, consumers are beginning to migrate to devices with larger displays as it is easier to consume content. The 5-inch display that was initially pioneered on Android on the Dell Streak proved to be a great balance of mobility and usability–it’s still small enough to tote around as a phone but the higher resolution display coupled with a larger display area gives an almost tablet-like experience.

With Apple playing up the marketing behind Retina Display and high PPI marks, is the race to 1080p HD futile on such a small display, or will the extra pixels make you want to stare at your mobile display all day?

LG Display’s 5″ Full HD LCD panel is a step forward past existing mobile display technology. The LCD panel based on AH-IPS (Advanced High Performance In-Plane Switching) technology features 440ppi and 1920×1080 resolution, providing for the first time Full HDTV quality on a smartphone. With 16:9 widescreen aspect ratio, the panel is also 0.5 inches larger, 2.2 times denser in pixels, and 1.3 times more advanced in ppi than the preceding 4.5″ panel at 329ppi and 1280×720.

“As smartphones become increasingly valued for how well they do multimedia and with the rapid growth of LTE enabling faster large file transfers, our new 5″ Full HD LCD panel is certain to prove a significant asset to the mobile market,” said Sang-Deok Yeo, CTO and Executive Vice President of LG Display. “With the world’s highest resolution smartphone display, LG Display continues to remain a step ahead in developing the most innovative in display technology products.”

The display solution of choice for smart devices, LG Display’s AH-IPS is the technology behind the new Full HD LCD display. With the high density of AH-IPS, the naked eye is unable to distinguish between individual pixels. AH-IPS panels also express the original color of images highly precisely, and feature a wide viewing angle as well as stable display image and rapid response speed when touched. Finally, with its brighter light transmission and lower power consumption, AH-IPS is ideal for use in outdoor settings.

The 5″ Full HD LCD panel from LG Display is expected to be released during the second half of this year, and will be on exhibit for the first time at SID 2012 Display Week in Boston starting June 4.