Verizon Wireless today announced its latest mid-range Android phone, the LG Spectrum 2 which is available for $99.99 with a two-year contract.

The LG Spectrum 2 features a large 4.7-inch 720p display and it uses a dual-core 1.5GHz Snapdragon S4 Krait processor. The Spectrum 2 comes with 16GB of internal storage, an 8MP rear-facing camera, and a 1.3MP front-facing camera.

The new phone runs Android 4.0 Ice Cream Sandwich with LG’s skin laid on top of it. There is likely an update planned for some time in the future to a newer version of Android, but the press release doesn’t mention specific timing. Like other recent LG smartphones the LG Spectrum 2 includes a Quick Memo app which makes it easy to capture screenshots and draw on them with a finger. 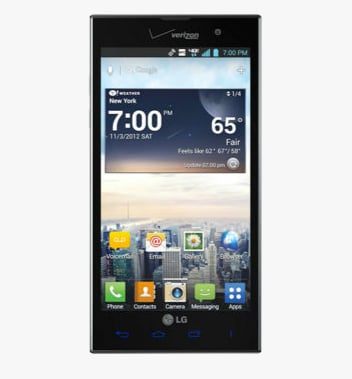 Other features include wireless charging and NFC. LG includes LG Tag+ stickers which use NFC to activate preprogrammed functions on the phone. For example, users can place a sticker on a nightstand that puts the phone into silent mode so it doesn’t wake them up at night. It’s easier than digging through menus or holding the volume down button for a few seconds.

The LG Specturm 2 also has its own special accessory called the LG Premium Sleeve with Smart Display, which Verizon sells for $25. The sleeve protects the phone and offers a small window to the screen of the device. When inserted into the sleeve the small section of the screen that shows through the case will display information like new messages and missed calls.

At a cost of $99.99 on a two-year contract after a $50 mail-in rebate the LG Spectrum 2 is arguably a high-end phone for a mid-range price. The price puts it in the category with phones like the Motorola DROID RAZR M and the year-old iPhone 4, but its specs seem more on par with devices like the DROID RAZR HD. It’s not clear if the phone performs as well as the RAZR HD, but the specs are just about there.