With four times as many pixels as a 720p HD display found on many of today’s smartphones, a new Quad HD resolution smartphone screen made by LG Display brings a pixel-topping 2560 X 1440 pixels to a 5.5-inch smartphone screen. That number equates to about 538 pixels per inch, or PPI, nearly double what Apple is using on its 4-inch iPhone 5 Retina Display with just over 326 PPI.

Pixels per inch is a measure–and lately a hyped marketing term–that serves as an indicator to what the naked eye can see. In the launch of the iPhone 4, the first smartphone from Apple to debut the Retina Display moniker, late CEO Steve Jobs told the public that 300 PPI is the minimum resolution on a smartphone screen where the naked eye cannot discern an individual pixel. Anything less than that would potentially look pixelated on a display, and anything more is good. Since then, Android-makers have tried to out-Retina Apple with resolutions such as qHD, 720p, and more recently 1080p full HD panels. 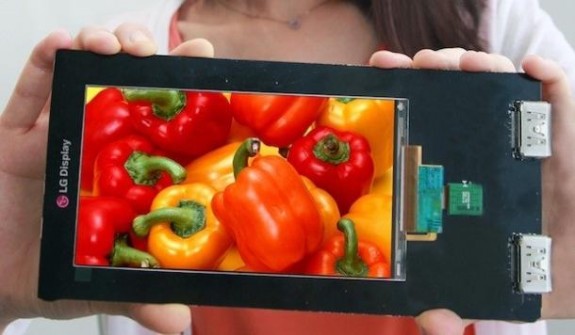 The 4X 720p resolution of the new Quad HD LG Display panel brings clarity that rivals Blu-ray quality on a smartphone according to LG.

It’s unclear when this display would begin appearing in a commercially shipping phone in the future.

And though there are huge potential upsides to producing better colors and dynamic range with a resolution this great, there are also downsides as well. Sharper text, images, and videos would require larger amounts of storage on a phone. While this isn’t too big of a problem with devices with removable storage, devices with fixed storage adn no memory card slot–like Google’s Nexus products and Apple’s iPhone and iPad–would mean that the device cannot grow as consumer needs change; users would have to upgrade to a new device to gain more storage or rely on the cloud.

It would also mean that users may use more data to get content onto their devices. Streaming video with that resolution or downloading full resolution images would require more data, which could equate to a costly proposition in an era of fixed data plans on AT&T Mobility and Verizon Wireless. It would also require faster data speeds for the download to feel seamless and instant, and carriers like T-Mobile US and Sprint Corp would need to grow their LTE footprints to accommodate and serve more users.

But these problems are good problems to have as it shows that innovation is happening at a healthy pace.

Could the iPhone 6 ditch the Retina Resolution of today and use LG Display’s new pixel dense LCD panels? One can certainly hope as LG Display and Apple already are partners. Your next phablet could have a resolution that rivals a much larger 4K UHD resolution HDTV at home.