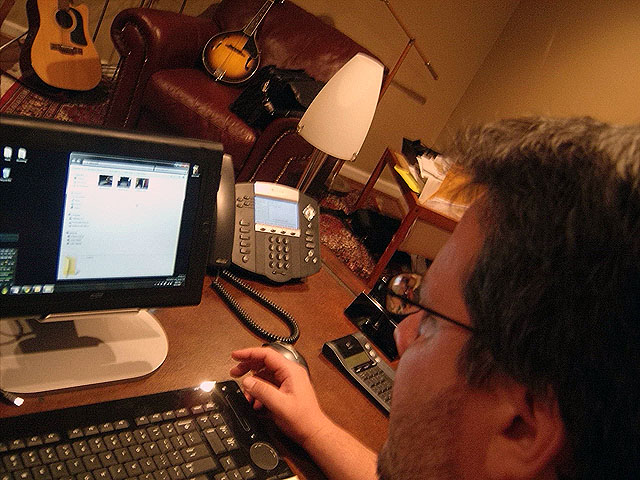 I’m a slate guy. Since 2001 I’ve had a tablet with me. For meetings, development, writing, and keeping in touch while on travel, it’s my primary mobile, travel, and home technology. I’ve nearly nine years of notes in OneNote that have migrated from my first tablet, (A HP TC1000 that’s still in use by a co-worker), to the current MotionJ3400. The J3400 was the first one that made me nervous. It’s been with me for almost two months and it’s almost perfect.

My number one concern when ordering the J3400 was resolution. Switching to a widescreen 1280×800 display from the MotionLE1700’s 1400×1050 standard aspect is a significant loss of real-estate. The first time I opened OneNote in portrait mode it felt cramped, even in my customary full screen mode. Landscape felt better, although I missed the down-space, the widescreen felt more natural.

Now after several hours of use each day, the only issue that still troubles me is vertical scrolling while reading web pages and documents in landscape. The adjustment for note taking in portrait is akin to switching from a letter to a legal pad; even though there’s technically fewer pixels, more notes wind up visible on a page. Reading and reviewing documents is a pleasure in this orientation also.

The minor drawback of less resolution is more than compensated by the display itself. TheAFFS+ technology developed by Hydis for the J3400 is the best display I’ve seen on a laptop or tablet, LE1700 included. Although there is still some washout when under the florescent lights of a conference room, the display remains readable in all situations. It is bright and clear, with staggering sharpness.

My second concern was the fact that the J3400 isruggedized. It was one of the features I wanted in my next tablet, but rugged usually comes at the expense of design, and I like my tools to look as good as they work. This turned out to be unfounded. The 3400 certainly has a more industrial bent to its design, but it’s also cleaner and more even visually than the LE series. In short, put side by side the LE series looks like old tech in comparison.

Now, after two months, what’s good and what’s not so good about the J3400? 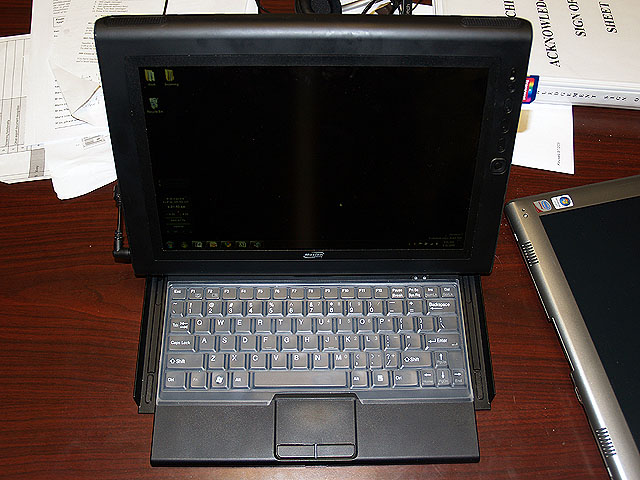 The newmobile keyboard is a vast improvement over the old. It has a clamshell design that opens smoothly and provides support for the tablet. When closed it attached magnetically to the back of the tablet for easy transport. The feel of the keys is good, and for the most part key position is not cramped. One exception are the half sized keys in the lower right for period and slash. You need to think about typing those characters, because they’re just not in the right spot, and that period key is important. Additionally the new keyboard docks to the tablet via a series of magnets and a pressure contact at the base. At times these contacts don’t hit exactly and you have to lift and re-seat the tablet. Finally, they keyboard no longer has a power and USB port built in, meaning you can’t just “grab and go,” you have to unplug, grab, and go.

TheJ-Series Flex Dock is exactly what it should be. It’s a smaller footprint than the LE series dock, and has some cable control. However, while the tilt function still exists, you can not rotate the table into portrait mode like you could with the LE’s dock.

Connectivity options are similar to the LE series, although wireless now includes 802.11n, and the mobile broadband has moved from Sprint to the carrier agnostic (and globally compatible)GOBI. Plus, if you option up the mobile broadband, you also get a built in GPS. All connectivity options work reliably and exactly as expected, but the GOBI setup can require a bit of patience.

Thebuilt in camera, which is positioned on the back of the unit, seems strange at first. In practice it works, providing a documentation camera that turns the J3400 into a point-and-shoot. Resolution is only two megapixels, and even with the built in illuminator low light performance is mediocre.

I have no issues with the port position of the various connectors, although the covers required for the dust and moisture ratings on the J3400 are a little cumbersome when trying to connect things one-handed. The cover over the Flex Dock port on the back has to be removed to dock the tablet, and frankly I’ve never put it back on. I’ve found the fingerprint reader a bit finicky about the angle of your finger, which of course changes depending on the orientation of the tablet.

The one LE series port I miss is the SD card. While the J3400 has an ExpressCard slot, and that can be populated with a memory card reader, I think Motion should have included the SD card slot in place of the smart card reader.

Finally, performance. I have the SSD and 4G of RAM. In short, the J3400 is an exceptional performer. It’s quite simply the fastest tablet I’ve used. Boot and shutdown times are fantastic, and even when I have too many applications open it doesn’t bog down. If performance is a top criteria, right now this is the tablet to have. In the real world, the dual battery configuration provides around six hours. If you happen to carry a third battery, which can be charged in the Flex Dock, you can hot-swap and last about nine.

I travel often, carry my tablet to every meeting, and with me home each day. I’ve never dropped one of my tablets, but the rugged J3400 lets me worry less. Knowing I have the horsepower to do development or data work while on the road or in the air lets me worry less. The J3400 is a great combination of performance and features, and its shortcomings are few and forgivable, at least in my mobile world. I’ll check back in at four months and let you know if the love continues.